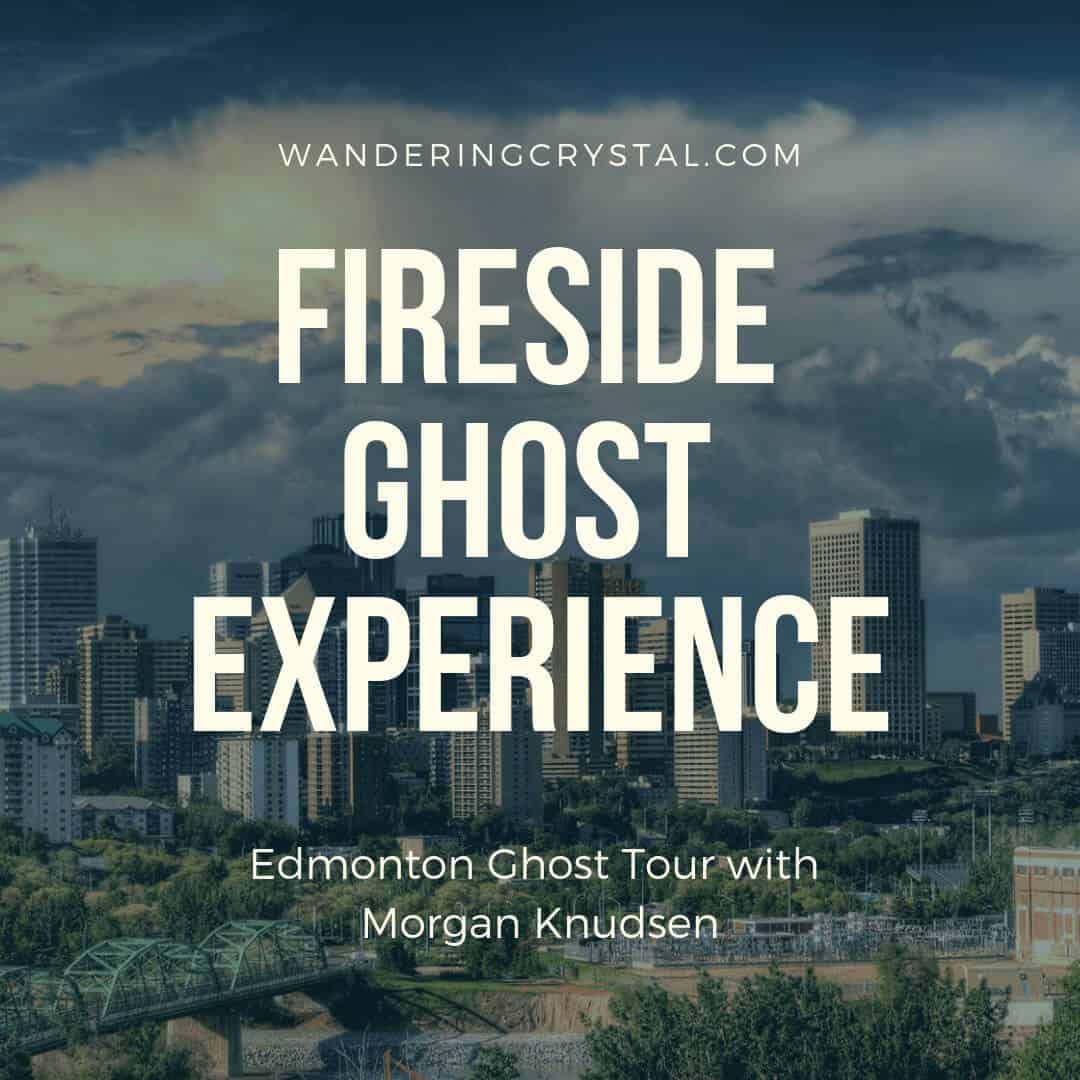 Every city, town and village on Earth seems to have its own ghost stories, with the spookiest tales usually set in locations with a tonne of history and culture. Anytime I think of ghosts, I always associate them with places that are creepy, abandoned and very old.

That’s why I never really considered Edmonton, Alberta to be a particularly scary place in the world of the paranormal. If you live in Edmonton, I’m sure you’ve heard some of the classic ghost stories, such as the horse ghosts that haunt the Hotel MacDonald.

Reports claim that they really did find bones of several horses buried beneath the hotel, so the story does at least have some truth to it! Or you may have heard about the spooky stories about the resident ghost child that haunts the Firkins House at Fort Edmonton Park.

I am always up for a fright and my lovely friend Lise invited me to a popular Edmonton ghost tour called the Fireside Ghost Experience. The adventure was directed by paranormal investigator Morgan Knudsen who stars in Travel + Escape channel’s Haunted Hospitals and Paranormal 911. Although I’ve never seen the shows (I don’t have cable) I could tell Morgan was an amazing person as she gave us a truly great insight into the haunted side of Edmonton.

As well as being an incredible tour guide, Morgan also helps individuals and families suffering from paranormal hauntings in a very different way than you might expect. She uses an approach she calls “Teaching the Living: From Heartbreak to Happiness in a Haunted Home” which encourages her clients to examine their behaviour and state of mind to heal themselves of past trauma, resulting in living a happier life.

The ghost tour started at MKT – Fresh Food and Beer Market, just off of Whyte Avenue. This location was formally known as the Iron Horse, and prior to that, the Strathcona Canadian Pacific Railway Station. The railway station was built in 1908 and is supposedly haunted by some engineers who worked there. MKT is not associated with the Fireside Ghost Experience — it’s just used as a meeting place for the limousine pickup, which made the spooky chat we had with our waitress even cooler!

Lise, her husband Bryan and I decided to meet up and have dinner at MKT before the ghost tour. We told our waitress our plans for the evening and she recounted all the paranormal experiences she’s had at MKT. She spoke about hearing footsteps coming from upstairs, various knocking sounds and a creepy vibe that fills the basement where her office is. She even told us how she doesn’t like locking up and refuses to be there alone at night. This unnerving chat was a great start to our ghost tour!

After dinner, we met with Morgan and the crew from Dynamic Limousine Services outside of MKT, where Morgan discussed the context of the ghost stories related to the building. She mentioned that staff would hear footsteps and knocking, confirming what our waitress had told us!

It was quite cold outside, so our group of 14 hopped into the limo bus to warm up. I knew the limo bus would be pretty awesome, but it was better than I expected. There was even a TV that had a roaring fireplace playing. Although there was no real heat coming from it, just the sight and sounds of fire helped us warm up from the cold.

The limo set off toward our first stop as Morgan stood at the front of the bus and told us stories about unusual lights that are often spotted in the River Valley of Edmonton. She went on to show us many photos and discussed the history of the area.

One of the best parts of the ghost tour was hearing about the real Edmonton history. These weren’t just paranormal stories that people made up over the years. They were real-life events and true history about the city that provided solid proof for the paranormal stories.

Our first stop was the Edmonton Public Schools Archives and Museum. The museum is housed in the historic McKay Avenue School, built in 1905 and supposedly haunted by a former construction worker named Peter who died during the building process. There is no record of a Peter who worked at the school during its construction, nor records of anyone dying during the building’s development. No one truly knows who “Peter” is supposed to be.

My own paranormal experience

Before this trip, my best friend Christina and I got lost one night while we were out exploring the city and stumbled upon McKay Avenue School.

We found it very creepy and decided to investigate the building further another time when things weren’t so dark and creepy. The following day, Christina turned on her TV and the McKay Avenue School was being discussed on a ghost show!

The museum is usually only open until 4 pm, but one evening I was lucky enough to be able to visit after hours. Unfortunately, this time I was alone and I knew Christina would be sad she missed out. Because of this – in true me style! – I ran all around the museum excitedly snapping photos so I could show her everything she missed out on.

No one was on the second floor with me, but I could hear the voices of the museum workers on the first floor. In one of the photos I took, you can see a strange outline of a man. At least I think it looks like a man! If you look where the flash reflection on the glass case is, you can see a strange image above that could be the shoulders and head of a man. There was no one behind me at the time and I was holding the camera level with my head so it isn’t a reflection of me. Whether or not it actually is anything, I don’t know. But the picture is creepy, so enjoy!

The spooky tour continued and our next stop was the General Hospital on Jasper Avenue in downtown Edmonton. I was born at this hospital when it had suitable wards, but nowadays the building operates as a continuing care hospital for long-term and hospice patients.

Morgan explained that there’s a hidden tunnel that goes underneath the hospital. It was used to transport bodies between the hospital and the morgue — you can’t really run bodies across the busy avenue above! She also told us about the residual energy of a woman in red who’s been haunting the halls of the General Hospital.

Residual energy is a type of energy left in objects or buildings by people who have passed on. The energy is unaware of its surroundings and is not an energy that can communicate with the living — it replays over and over again.

Moving on to a completely different kind of location, we headed towards the rubble that was formerly the Arlington Apartment blocks. The Arlington apartments have been a victim to several arson attacks and have now officially been torn down.

Morgan mentioned that for a short period, the horrific serial killer is known only as James B. (Bluebeard) Watson lived in an apartment there. He was known for luring women into long-term relationships and then killing them after they got engaged. One of his victims was an Edmonton woman.

The history of Edmonton

Our group then moved on to a particularly sobering destination: Edmonton Municipal Cemetery. This cemetery is home to several famous Edmonton natives including Frank Oliver (the namesake for Oliver Square in Edmonton) and Wop May, the person behind Mayfield Common. Morgan discussed the history of Edmonton and the lives of these men.

One interesting fact was that, while Frank Oliver was once seen as a man who promoted the equal rights of the indigenous people, he drafted legislation to abolish indigenous people from traditional land. After this food for thought, Morgan guided us around the graveyard and recounted the history of several graves and a mysterious mausoleum.

The most haunted site in Edmonton

After all these fantastic and terrifying locations, we finally pulled up to our last stop: the Charles Camsell Hospital, one of the most haunted sites in Edmonton with a horribly dark history.

Known for being a tuberculosis hospital for indigenous people back in the 1950s, most of its patients were brought in from villages all over Alberta who suspiciously contracted the then incurable TB. Many people passed away at the hospital, but their bodies were never returned to their families.

Much later, the bodies were discovered buried within the hospital grounds in mass graves. After this find, the identified bodies were dug up and sent back to their families. The hospital sat empty and abandoned for 20 years, as construction crews were experiencing awful paranormal activity. This included large pieces of construction equipment being moved and destroyed, hearing footsteps and bangs, and seeing strange lights.

The former hospital is currently being turned into condos. Progress is still slow, as many people claim that all the bodies have not yet been dug up.

The ghost tour with Morgan was phenomenal and if you get the chance to either attend the ghost tour in Edmonton or see her at one of her other paranormal events held all over Canada, you definitely should!

I really loved the tour and will be attending one of her paranormal evening events at the historic (and haunted) Starlite Room in Edmonton soon!