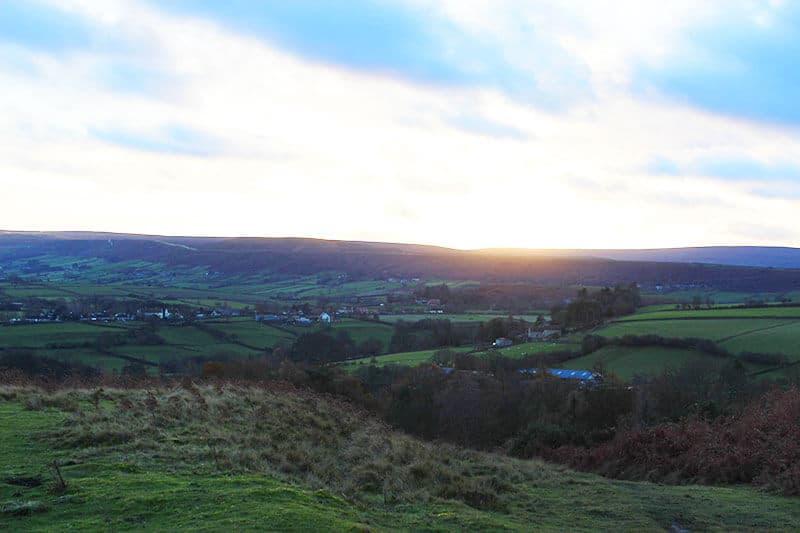 Sweat drips down the side of my face as my hand grips the vinyl door handle of our tiny white Toyota Yaris rental car. Chris whizzes down winding country roads, narrowly missing the suicidal pheasants ready to end their lives as they leap into the path of our oncoming vehicle. This was our terrifying drive through England.

Where it all began

When I lived in Scotland, only a few of my friends had their driver’s license. And Chris was not one of them. I once attempted to drive a friend’s car in the car park at my workplace. But driving while sitting on the “wrong” side of the car felt weird. (In Canada, the driver sits on the left and the passenger sits on the right. It’s the opposite in Scotland.) I had to shift gears with my left hand instead of my right, which just confused things and I had no confidence at all.

So, for our upcoming road trip, I nominated the newly-licensed Chris to be the driver. I wasn’t sure how fast he’d drive or how experienced he really was, but I’d made up my mind.

Chris gave me solace by telling me he was the only driver during his previous trip to Iceland, where the cars are set up the same way as in Canada. This little bit of info left me feeling more confident in Chris’s driving skills.

Where on earth is the car rental place?

On the morning of our trip to the North York Moors, Chris and I stepped into the brisk Yorkshire air and set off for the train station. The car rental place was right next to the York Railway Station, so we thought it would be easy to find. We confidently walked around the train station looking for the rental building…but it was nowhere to be found.

We decided the car rental place must not exist and resigned to not making it to the moors that day. Then we had the bright idea of heading inside the train station and asking for directions. The woman we asked looked at us like we were joking. She pointed straight ahead at the car rental place we’d been looking for the whole time.

After that minor setback, we walked into the reception area to pick up our car. We were greeted by a lovely English man who asked us where we were headed, as our rental was just for one day. He told us he’d just been in Whitby (the final stop on the road to the North York Moors) and I invited him to come with us! I said he could be the driver because I assumed he’d guide us in the right direction. But he politely declined in the true British fashion, gave us a GPS (or Satellite Navigation, as they call it in the UK) and set us on our way.

We were gifted with a tiny white Toyota Yaris that comfortably seated us both. Chris took the keys and started the ignition. But as he put the car into gear and stepped on the gas pedal, we immediately jerked forward. The car suddenly stalled.

I looked at Chris and saw his hands shaking nervously and he reminded me he hadn’t driven in a while. It’d been over a year since his Iceland trip. And before that, his last driving experience was on a New Zealand road trip. We were in for a long day. As he started the car up again, we slowly drove toward the busy line of cars that were all attempting to leave York.

The GPS with a mind of its own

We turned into traffic and set off to leave York, heading for quieter roads lined with country fields and small rustic cottages. We set the GPS for our first stop near Ripon in North Yorkshire. But GPS has other ideas. Often the distances we got were in weird measurements and the system failed to give us clear directions. Sometimes it would tell us our next turn was 300 feet away. Other times it would tell us to turn left, just after the turning! It truly had a mind of its own.

Eventually, we arrived safely at our first stop for Fountains Abbey and Studley Royal Water Garden. Here we enjoyed a break for a few hours, tucking into a small lunch before going on a long walk around the park. We spent time relaxing and winding down from the manic drive. But before long we were back on the road heading towards the stunningly beautiful autumnal North York Moors.

As we passed little villages and quaint towns, we were met with death-defying pheasants. They were standing in the middle of country roads or running out at us as our car approached. Chris had to slam on the brakes and narrowly missed a few of them.

I was angry, stressed and covered in sweat. At the time I didn’t know which was worse – the other cars or the unpredictable animals on the road. I was so mad at the birds! They were acting like it was a game! Seeing how close to death they could get for the thrill of it. Either that or they were just too stupid to realize the danger they were truly in.

Finally some peace and quiet

As we reached the moors, the roads became quieter and offered us some comfort. Chris, I and our tiny car were alone. We could take our time driving along the winding roads, surrounded by lush fields of yellows, reds and greens.

Tiny houses scattered across the moors, showing us signs of life in the otherwise desolate location. This was the best part of our drive. We stopped several times to take photos and just enjoyed the peaceful scenery. We embraced the calm before heading back to the insanity that is York to drop off our car.

The day was great, even though it was intense and full of fear. Once we dropped off our car, I felt so relieved that the journey was over. We were back in York, safe but exhausted from the drive.

More Information about England and the UK