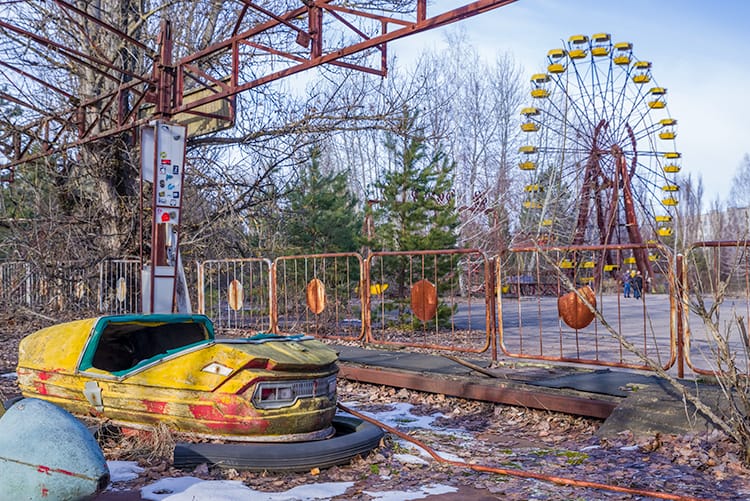 Dark history sites you can visit virtually? Yes, please! With more people staying home, tourist sites around the world have been creating virtual tours that you can visit while sitting on your couch.

Museums, catacombs and dark tourism sites from around the world are producing online exhibits and tours filled with educational information for everyone who cannot travel right now.

Explore online exhibits to virtual tours of sites with a dark history such as a trip to the Paris Catacombs or the National Museum of Death in Mexico.

Spend your time visiting dark tourism sites like the Auschwitz-Birkenau State Museum in Poland. Or relive a historic event, like the falling of the Berlin Wall.

Whatever your dark history interests are, there are virtual tours and online exhibits that help you explore the sites from the comfort of your home.

The Palace of Holyroodhouse – Scotland

The Palace of Holyroodhouse in Edinburgh Scotland has been a palace for the British Royals throughout history.

Mary, Queen of Scots was living at the palace when she witnessed the brutal murder of her secretary David Rizzio. Take the virtual tour and see how the Royals lived during their days at the Palace of Holyroodhouse.

Take the virtual tour: The Palace of Holyroodhouse

Tour the collection of Death in the History of Mexico. From the Pre-Hispanic Era to the creation of the ofrendas that were used to accompany the dead to the afterlife.

The virtual exhibit displays the history surrounding the Day of the Dead rituals that occur in Mexico.

See the macabre and morbid works of Julio Ruelas and how the modern world represents death through art.

Visit the virtual exhibits from the Hiroshima Peace Memorial Museum in Japan. The online exhibits offer a peek into the belongings left behind by the victims of the atomic bombings of Hiroshima and Nagasaki.

Be sure to check out the exhibit that outlines the districts lost. Explore the temples, cafes and trees that once lined the grounds of the lost neighbourhoods.

The Abandoned City of Pripyat – Ukraine

Take a virtual tour through the Ukrainian city of Pripyat. The city was abandoned after the 1986 explosion of the Chernobyl Nuclear Power Plant.

The site is incredibly interesting, but with high levels of radiation still lingering in the area, a virtual tour may be all you will want to experience.

The Auschwitz-Birkenau State Museum virtual tour offers several online exhibits that cover the evacuation and liberation of the Auschwitz Camp.

Other online tours illustrate the history of the Sonderkammando, which were death camp prisoners that were forced to work at the gas chambers during the Holocaust.

The exhibits will help you learn and understand the tragic realities that occurred during the Holocaust from the world’s most well-known concentration camp.

The mosaics and frescoes in the Catacombs of San Gaudioso are incredibly beautiful and full of so much history.

You will learn about how niches in catacombs were used to prepare corpses before the bones were cleaned and laid in their final resting place within the catacombs.

Take the virtual tour: The Catacombs of Naples

The Fall of the Berlin Wall – Germany

In 1989, the world was watching as the Berlin Wall which separated East Germany from West Germany began to fall.

Crowds gathered and chipped away at the wall to finally have freedom and unity between the two cities. Join the virtual tour and experience what it was like to in Germany when the Berlin wall fell.

Take the virtual tour: The Fall of the Berlin Wall

There is something terrifying about the endless tunnels that live below the streets of Paris. Take a virtual tour of the infamous, beautiful, but kind of scary Paris Catacombs from the safety of your couch.

Take a tour of the Srebrenica Genocide Memorial in Bosnia & Herzegovina. This virtual tour, which is in video form, takes you through the cemetery and memorial for those who lost their lives during the 1995 genocide.

Visit The J. Paul Getty Museum’s online exhibit which features images of Death in the Middle Ages. Some of the images offer a glimmer of hope regarding the afterlife, but most are downright disturbing with a macabre outlook.

The Winchester Mystery House in California doesn’t necessarily have a dark past, but it has a mysterious tale associated with the woman that built it.

So, to make up for their deaths Sarah continuously renovated the Winchester House until her death. The house is now haunted by the spirits that plagued Sarah during her life.

Take a video tour of the Winchester Mystery House and check out all of the doors and staircases that lead to nowhere.