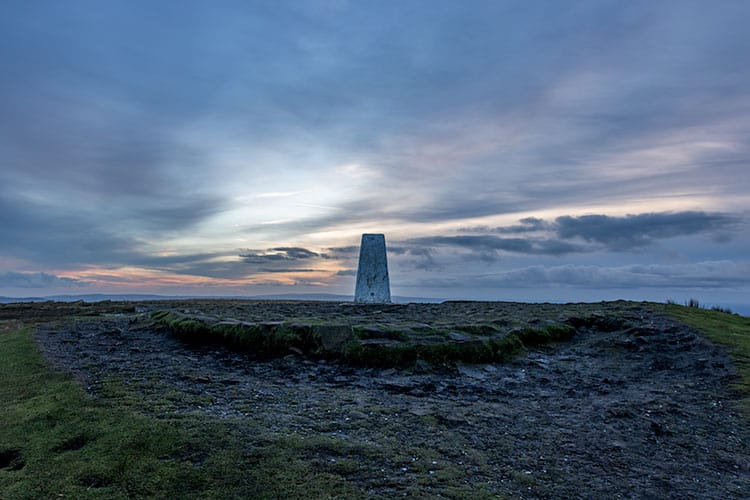 The 17th-century witch trials in England that swept across the country resulted in a wealth of historical witchcraft sites which you can still visit today.

What sparked the horrific witch trials and ongoing torture in England? The answer is King James I.

He was the initial perpetrator of Scotland’s witch hunts. Following his involvement, witch trials were held throughout the UK for over 100 years and their haunting memories still linger in every corner of the nation today.

From the ancient city of Exeter to the seaside village of Boscastle and the Pendle Hills of Lancashire, the witch trials in England affected the entire nation. With panic and hysteria running rampant throughout the UK, no one was truly safe.

To unveil the truth about the horrendous goings-on that were commonplace during this terrible time in history, follow my macabre trail of witch sites to visit in England.

During your journey, you’ll traverse the mysterious and untamed Pendle Witches Trail and visit Lancashire Castle to see the courtroom where witches were convicted.

You’ll tour the Northern Cornwall village of Boscastle, home to practicing witches in Britain and explore England’s own Museum of Witchcraft.

History of Witches in England

Following Queen Elizabeth I’s death in 1603, there was no heir to the throne. So England wasn’t left without a ruler, James VI of Scotland became James I of England, joining the crowns of England and Scotland in personal union.

The English were excited about this significant event and wanted to know what King James would do for their country. Many were keen to learn more about him, so they read the one book he wrote: “Daemonologie”.

Following this, they quickly discovered he was serious about hunting witches. King James believed there were witches all over Scotland doing the bidding of Satan.

While he was certain they were dangerous, he was adamant they should be prosecuted and punished by the proper authorities. Unfortunately, the English were swept away by panic and confusion and set about solving the problem themselves.

The outcome was the witch hunts in England which snowballed into appalling years of torment, torture and fear.

The concern that witches were obsessed with poisoning, maiming and killing on behalf of Satan suffocated the country like a thick blanket of dread.

Witch hysteria even resulted in the creation of the Witchfinder General in East Anglia — a man paid to seek out witches.

Were witches burned at the stake in England?

Witch sites to visit in England

With witch-hunting sprees spanning hundreds of years, there are so many witch history places to visit in England that it would take almost a lifetime to see them all.

Here are the most fascinating witch sites to visit in England where witches were imprisoned, persecuted and executed throughout the 17th century.

The Trials of the Pendle Witches – Lancashire

The trials of the Pendle witches are some of England’s most famous witch trials.

Their notoriety is likely due to the intense extremity of one particular trial which resulted in the execution of an entire family following the accusation of a single prime witness: a nine-year-old girl named Jennet Device.

The trials were also well documented by Thomas Potts, the clerk of the court. He released a book called “The Wonderfull Discoverie of Witches in the Countie of Lancaster” which details everything that occurred in the courtroom during the witches of Pendle trials.

What makes the Pendle witches trials so interesting is that they began when young Alizon Device was said to have cursed a man who fell ill shortly afterward.

She came from a powerful family of healers and was so panic-stricken that she truly believed she was responsible. She confessed and named two others as “cunning women” — poor women who were said to heal with charms or spells.

Ten people were charged and hanged for witchcraft in the Pendle witch trials, four of whom came from the Device family.

One of the worst things about the Pendle witch trials is that when the witches were hanged, the drop was too short. Instead of dying instantly as a result of a broken neck, they died a slow and painful death by suffocation.

You can walk in the footsteps of the accused witches by following the walking with witches trial through Lancaster.

Lancaster Castle played a huge role in the Pendle witch trials. Suspected witches from the Lancashire villages of Pendle, Padiham, Samlesbury and Windle were imprisoned in a tiny basement cell now called the Witches Tower within the medieval fortress.

The castle is also home to the Crown Court where the 1612 trials were held. Although the original court was demolished, the place still gives you an idea of what the witches had to endure while on trial.

This is where Thomas Potts recorded the trial and later published his notes in his book.

Alizon Device was on her way to Trawden Forest when she met John Law, the man she was said to have cursed who later suffered what was probably a stroke.

This was the encounter that changed her and her family’s lives forever. She was so racked with guilt after John Law fell ill that she confessed to witchcraft.

Malkin Tower is the suspected location of the Pendle Witches’ coven. It was also known as Demdike Coven, named after Alizon’s grandmother.

The exact whereabouts of the tower remains a mystery, but archeologists have been working on finding it.

The remnants of a cottage near Lower Black Moss reservoir in Barley is the suspected location.

Pendle Hill and the surrounding area was a hotspot of witch activity in the 1600s. One of the most popular witchcraft locations in England, the hill has close connections to the witch trials and the supernatural, drawing huge crowds each Halloween.

A climb to the top of the hill offers stunning views of the English countryside. And who knows? You might even experience a ghostly visit from one of the famous witches in England who died during the trials.

Gallows Hill, in Williamson Park near the Ashton Memorial, is where the Pendle witches suffered their terrible execution. The short drop from the gallows meant they slowly suffocated instead of dying quickly.

Alice Nutter was accused of witchcraft and executed for crimes she did not commit. A Catholic woman in a Puritan world, Alice was simply in the wrong place at the wrong time. There’s a metal statue in Roughlee which commemorates her life.

Lancashire has put together a really great walking tour allowing you to follow the journey the Pendle witches took in 1612. Be sure to put on your walking boots and follow one, or both, of the trails to discover several witch sites to visit in England.

The three-hour Pendle Witch Experience Tour takes you to all the most important sites around Pendle Hill while captivating you with historic tales of the witch trials.

Visit Moorhouse’s Brewery in Burnley and drink some delicious witches brew. The brewery created the Pendle Witches’ Brew Ale so you can get a taste of Lancashire’s witch history. The brewery also offers tours for a deeper understanding of how they make their alcohol.

The Witches of East Anglia – Norwich

East Anglia was responsible for a lot of brutalities that occurred during the witch trials in England. Matthew Hopkins became known as the Witchfinder General – a self-created job that involved hunting witches for money.

He would seek out easy targets and torture them by depriving them of sleep and making them run up and down a room for days.

In his whirlwind tour of East Anglia and beyond, Hopkins was responsible for over 300 trials that led to the execution of more than 100 innocent people.

Hopkins wrote a pamphlet called “The Discovery of Witches” which detailed his witch-hunting methods.

Matthew Hopkins was paid to get rid of the witches in Suffolk and Norfolk, leading to the largest witch trial in England.

He was responsible for the deaths of 68 people in the area, including 19 hangings in a single day in Chelmsford! Visit the King’s Lynn in Norfolk, the place where witches were hanged during Matthew Hopkins’ reign of terror.

One of the most well-known victims of the Bury St Edmunds Witch Trials was Reverend John Lowes who was accused of being a witch working with the devil.

Matthew Hopkins couldn’t extract a confession from the reverend. In frustration, he tortured the ordained vicar by dunking, which was completely illegal at the time!

Reverend John Lowes was dunked in the moat at Framlingham Castle. This was enough torture to extract a confession.

Despite his admission, the Reverend never turned his back on God and never admitted to working with the devil. After conducting his own funeral service at All Saints church in Brandeston, Suffolk, he was hanged.

The Mistley Thorn Hotel is where Matthew Hopkins lived and worked during his time as Witchfinder General. It was here where the man hatched his cruel and greedy plans to brand easy targets as witches and have them executed.

Many victims who were tortured by the Witchfinder General were held in prison cells at Colchester Castle. The witches were shackled in an overcrowded cell in unsanitary conditions without natural light.

You can take a tour and step inside the cells to see how the accused were kept until the days of their trials arrived.

The final person to be accused of witchcraft in England (they were also the last witch to be executed in England) was from Bideford in Devon.

The little town features a mural with a stereotypical image of witches toiling over a boiling cauldron and a memorial plaque in honour of the final execution of witches in England.

One of the best witchy travel destinations in England, Burley was once home to a famous white witch named Sybil Leek. Even today, the town fully embraces its witches and its ties to witchcraft.

Be sure to visit the shop A Coven of Witches to purchase all kinds of witchcraft items.

Museum of Witchcraft and Magic in Boscastle Cornwall

Boscastle in Cornwall is also one of the most witchy places in England. Here you’ll find one of the best Museums of Witchcraft in the world, run by practicing witches and filled with important artifacts related to the history of witchcraft in England.

The museum was once located in Bourton-on-the-Water, where it was a victim of constant attacks from people who didn’t want it in their town.

Be sure to check out the museum for a greater understanding of historical and modern witchcraft in England. Their collection of occult items includes exhibits on Satan and the persecution of witches.

More Information about Witch History around the World