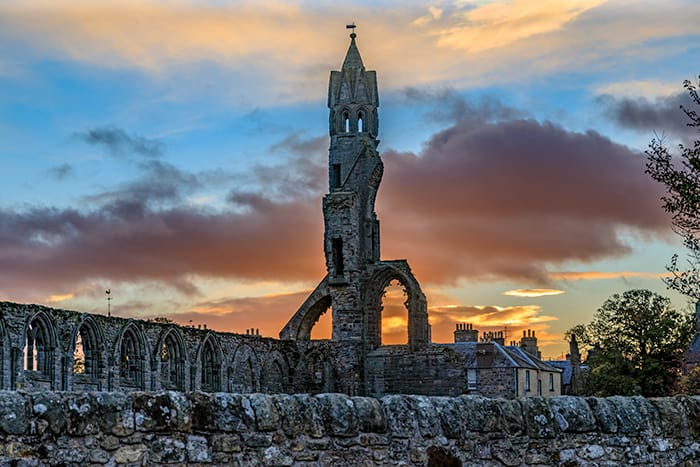 Although best known for its golf courses and university, St. Andrews has a much darker side with a macabre history. St. Andrews Cathedral in Fife was once the site of the largest medieval church in Scotland. Since left to ruin, today the temple is blanketed with a dark history and spooky stories abound about the ghosts of St Andrews.

The cobbled streets of St. Andrews lead you to medieval ruins which slowly reveal the town’s turbulent past. With 200+ locations rumoured to be possessed and more than 400 ghosts said to roam the surroundings, St. Andrews oozes mysterious darkness and haunted history from every pore.

The Castle and Cathedral of Saint Andrew

St. Andrews Castle and Cathedral grounds have witnessed many terrifying events over the centuries. So you can catch a glimpse into the stormy past yourself, the town invites you to wander through the ruins, walk amongst the resting places in the graveyard and admire the sculptures and relics found onsite in the museum.

I also recommend you climb to the top of the tower and take in the spectacular views of the city from the mighty peak. Just take care not to run into any of the spirits that call the haunted tower home.

Once the largest church in Scotland, the Cathedral of Saint Andrew was destroyed and turned into ruins during the Scottish Reformation. Luckily, parts of the ancient cathedral were saved and the haunted history lives on in the structure today.

The White Lady of the Haunted Tower

As you walk through the ruins of St. Andrews Cathedral, you’ll find yourself immersed in an uneasy atmosphere created by timeworn spirits spilling out of the historic stones.

Reports of White Lady sightings go as far back as the 1800s when she was often said to scare passersby with her luminous body. Because of the eerie sense of dread which fills the atmosphere around the tower at night, most people tend to steer clear of the area after sunset to avoid coming face-to-face with the beautiful ghost in the white dress.

Revealing the truth of the Pends at St. Andrews

The Pends at St. Andrews, a gate across the street from St. Andrews Cathedral, was once the main entrance into the monastery and the checkpoint for anyone visiting the cathedral. The sad and dark truth is that the pilgrims, mostly plague victims who sought out the cathedral for help, were often turned away and left to die alone in the streets of St. Andrews.

As you stroll along Nun’s Walk, it’s likely you’ll feel the sensation of being watched. The energy around here subtly changes and often makes people paranoid, forcing them to look over their shoulder to see if the watching eyes they can feel really are there.

Occasionally, a spirit will make themselves known and scare away those who cross their path. Rumour has it, a woman dressed as a nun sometimes walks down the road carrying a lamp.

As she approaches her victim, she removes her black veil, revealing her horribly disfigured face in an attempt to scare them. The unnamed veiled nun is definitely one of the more terrifying of the St. Andrews ghosts.

The veiled nun is believed to be the ghost of a woman who lost the love of her life. No one’s sure why, but some say she was rejected and sliced up her beautiful face out of anger and heartbreak.

Following the rejection, she no longer desired the love of anyone and decided to cut off her nose, ears and eyelids. After her self-mutilation, she died of her injuries shortly after becoming a nun and committing herself to God.

To make things even more macabre and to keep your feelings of paranoia alive while at the Pends, you should know about the tale of a white angel statue that keeps a watchful eye over the Eastern Cemetery.

The statue, which sits against a wall atop the hill, is said to fly around in search of victims to strangle the life out of. While you’re there, take a close look at her right hand. You’ll see the residue of dirt makes it appear her hand has moved.

Even though it could be nothing more sinister than a creepy name for a graveyard, how horrifying is the title “Chamber of Corpses”?

The haunted tower that sits among the St. Andrews Cathedral ruins is a place burdened by dark history. The tower walls hide a sealed crypt where ten well-preserved mummified bodies were discovered.

Unnervingly, one of the bodies was a perfect match for the White Lady often seen haunting the premises. It was the mummified remains of a small, thin woman with dark hair carefully wrapped in silk fabrics.

The corpses are believed to have belonged to local Celtic saints from as far back as 1000 years ago.

Although widely regarded as a good guy, he did have to discipline a few misbehaving monks. One badly behaved monk didn’t like being punished and decided to seek revenge by murdering Robert and tossing his body over the edge of St. Rule’s Tower.

Today, the ghost of a monk, thought to be Robert, can be found lurking in the stairway leading up to the top of the tower. He’s said to help guide people inside the tower, ensuring they remain safe and don’t end up over the edge as he did.

His ghost is also often spotted being tossed over the parapet and fading out of view as it falls from the tower, almost like a re-enactment of his death.

The Ghosts of St. Andrews Castle

Is any castle a true Scottish castle if there aren’t gruesome tales of death and betrayal hidden deep down in its dungeons?

St. Andrews Bottle Dungeon is a chamber 7 metres deep, sentencing those who enter to a grim fate. The dungeon is so small that you could easily think it was just a well. But in fact, it’s a nightmare-inspiring 5 metre-wide claustrophobic room that was the setting for the appalling and grisly death of George Wishart.

You can spot George’s initials on the road just outside St Andrews Castle. The place where his initials are is the spot where he protested against the Catholic church. Wishart, who was a protestant, paid for his crime of protest by being burned alive by Cardinal Beaton.

His execution heavily weighed upon the protestants in St. Andrews and in retaliation for the unjust act, they rushed the castle and murdered the Cardinal, stabbing him and hanging his body up in the street for all to see.

The spirit of Cardinal Beaton is now said to be stuck in St. Andrews and has been spotted rambling throughout the castle’s halls and grounds.

Visiting the Ghosts of St Andrews Cathedral in Scotland

When you visit St. Andrews, be sure to sign up for a trip with St. Andrews Ghost Tours. The tour is led by local guide Richard Falconer who will show you the town’s famous sites, including St. Andrews Castle and Cathedral, and will recount spooky tales of ghosts and their connection to the history of the area.

If you run into any ghosts haunting the medieval walls of St. Andrews, be sure to leave me a comment and tell me your story.

Interested in reading more about the ghosts of St Andrews? Check out these books:

Ghosts of St. Andrews – A Ghost Tour of the Ancient City – Richard Falconer

Want to stay up to date with the dark travels of Wandering Crystal? Subscribe to the newsletter!