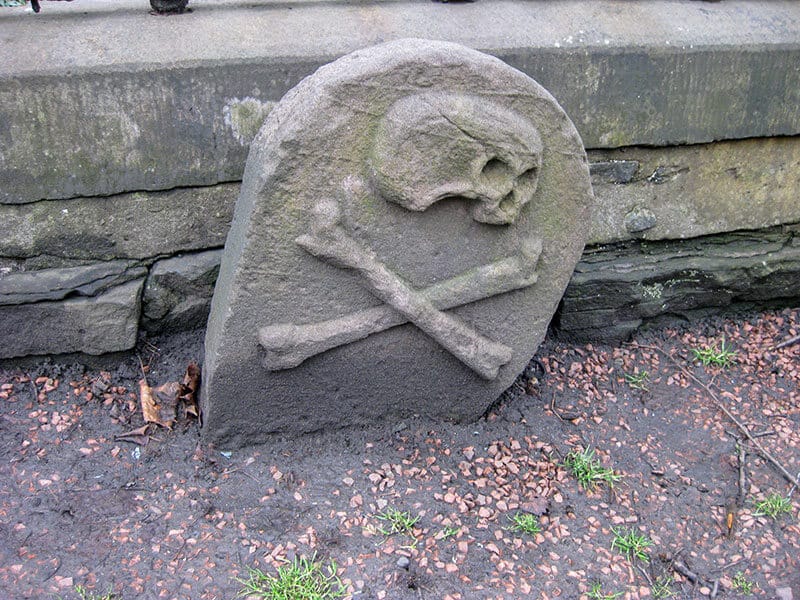 Edinburgh is a city oozing with creepy historic events, many of which have paranormal backstories. Once upon a time, Scotland’s capital decided to throw an amazing festival called “Mary King’s Ghost Fest” which featured several spectral events, including trips to the Edinburgh underground vaults, the incredible Mary King’s Close (my personal favourite), ghost storytelling and even overnight vigils in the Blair Street Vaults and along Damnation Alley.

The newly uncovered Damnation Alley, part of the dark and eerie Edinburgh vaults, was to play a part in this year’s festivities for the first time. As an avid fan of the underground vaults hidden below the streets of Edinburgh’s historic Royal Mile, I was eager to explore the new section that had yet to be investigated by the other vault fans in the city.

The vaults are the perfect way to spend Halloween in Edinburgh.

Not your Average Edinburgh Vault Tour

The tour began at 10 pm and I was incredibly excited! I went along with my friend Jamie, who was also interested in the creepy and macabre. A group of around 20 of us gathered next to the ‘City of the Dead’ tour sign close to St. Giles’ Cathedral and we eagerly started chattering away amongst ourselves. We soon discovered that none of us had ever been on an overnight vigil in any of the other vaults that lie beneath the streets. Shortly after, we were joined by the host and two paranormal mediums.

It wasn’t long before we realized that this wasn’t your normal Edinburgh underground vault tour. Ordinary tours usually feature an incredible storyteller who combines real history with genuine artifacts.

As they teach you about the horrible history of Edinburgh, they weave the Edinburgh vaults and related paranormal stories into the narrative. Instead, the tour I went on was a paranormal experience which included using an EVP recorder, a séance and listening to the paranormal mediums speaks about what may have been hiding in the vaults.

As we made our way down toward the dark tunnels, our tour guide locked the door behind us with a resonating boom. From then, we were locked in for the night, unsure of what events would unfold.

There was electricity in the air filled with uncertainty, excitement and a little bit of fear. I could feel the charge as my eyes adjusted to the candle-lit vaulted rooms buried below the streets of a bustling late-night Edinburgh.

At the time of the tour, Damnation Alley consisted of two vaulted rooms and an area of rubble where the walls were being torn down to reveal additional vaults and underground tunnels filled with even more history and secrets.

Discovering our plans for the evening

Our group gathered around in the first dark vault lit only by a single candle, while my nostrils were filled with a musky dust scent that encapsulated the air of the newly discovered vault.

That’s when we were introduced to our two paranormal tour guides. As it was part of a ghost festival, our tour would be hunting for any paranormal activity present in the vaults.

We’d be conducting a few paranormal investigations, such as asking any present entities questions with an EVP recorder and taking part in a séance later in the evening to see if we could make contact.

I am not necessarily a believer in the paranormal, but I love all stories shrouded in history, mystery and the macabre — which includes ghostly stories.

Plus, there’s just something about a good ghost story that sends chills up my spine and scares me enough to spend the night with the lights on because I’m too scared to sleep!

Although I’ve had unexplained ghostly experiences in my past, my healthy skepticism still exists, but not so much that it hinders my addiction to the paranormal.

Talking to the other side

With this in mind, we began our first EVP session of the evening. Unlike a normal recording device that records all sounds, ours would only pick up on specific sounds purposefully made, including those from a paranormal source. We all stood quietly and individually began asking questions,

“Is there anyone here with us?”

We all stood in utter silence, not even moving for fear that the rustle of our clothes might be accidentally picked up by the recording.

“Does anyone want to speak to us?”

Standing there, our eyes scanning the room, looking at the faces of everyone gathered around the EVP recording.

“If someone is here with us, please make a sound so we are aware of your presence.”

Silence. Nothing but another long pause from our group as we waited for a sign.

A few more questions were asked, followed by long silences from our group waiting for answers. Answers that would only be picked up by the EVP recording, if anything decided to speak up.

The recording was played back, this time skipping the long, drawn-out pauses that filled the room when we originally asked the questions. Nothing. No one wanted to talk to us.

We lingered for a bit while our paranormal mediums walked around, trying to pick up any entity willing to connect with them that evening.

One of the mediums, an older man with an accent so incredibly thick that even I, someone who’d been living in Edinburgh for nearly two years at that point, had difficulty understanding, spoke up.

“I feel there is someone here named Peter,” he said, explaining that this was a man who had potentially died in the Edinburgh vaults. He tried to get more information, but Peter wasn’t very forthcoming with his words.

I wanted to know what a medium sees or feels when they’re being contacted. Do they see apparitions in their heads and hear the words of the people communicating with them? Or can they actually see the person forming in front of them, speaking to them as if they were just another guest on a tour of the Edinburgh vaults?

But the medium wouldn’t elaborate. He’d only tell me that there were things in this world that people couldn’t even possibly imagine. Horrible creatures, ghosts, demons and so much more. Although skeptical, it still sent a chill through my body that hit me so hard I got goosebumps up my arms.

Later on, we held a séance and attempted to contact the dead with the help of our mediums. We enter the second vault which was larger, but just as damp and dark as the first and all held hands.

One of the rules was to never break the circle, no matter what. If someone needed to stop, we’d end the session properly before we stopped holding hands.

With this knowledge in mind, we all formed a very large circle, turned on the EVP and locked hands, thus forming one large unbreakable circle of energy.

A silence fell upon us as the séance began.

The mediums and paranormal investigators did all the talking, once again using our group energy to try and give the dead more power to be able to speak to us.

The questions were similar to the first EVP session prior to the séance, excluding one very specific question that our medium asked,

“I don’t feel Peter’s energy anymore. Where is Peter?”

We were all silent when my back started to hurt and I really wanted to let go of my partner’s hands so I could relieve myself of the pain. I silently told myself to just wait it out.

The séance would be over soon and I could stretch. People started to get a bit restless, sore and complaints of wanting to finish the séance filled the room.

I can’t recall the exact words that were used to close the circle but once complete, we were able to let go of each other’s hands. I immediately felt better. My back pain left and I was glad it was over.

It’s difficult having to stand in the same spot while holding strangers’ hands for 20 minutes. I can understand why everyone felt a bit of pain.

The EVP recording was played back, except this time we heard the answers. Occasionally, a question was met with what sounded like a dog barking, which was eerie since we were all completely silent.

What was really creepy was the answer to: “Where is Peter?” A very quiet and soft voice answered, “Who is Peter?” It was so quiet everyone took a turn holding the EVP recorder up to their ear so they could hear the ghostly voice. I still can’t explain what caused the sound, because I was present in the silent group the entire time.

The paranormal investigation team was more interested in the barking that appeared on the EVP recorder as, apparently, one of the early signs of a poltergeist (or a demon) is the sound of dog-like barking.

The Edinburgh vaults are definitely worth a visit

Our experience was coming to an end. The possibility of a poltergeist left our paranormal investigative team eager to investigate further and it made for an extra incredible night for us.

I’m so glad Edinburgh embraces its dark past and creates so many different opportunities to really experience and step foot into Edinburgh’s history.

Through cemetery tours, Edinburgh’s horrible history tours and all things paranormal, Edinburgh truly is a dark tourism destination. If I could spend a night in the Edinburgh vaults on a regular basis, I would! It was an incredible opportunity that I am so happy I had the chance to experience.