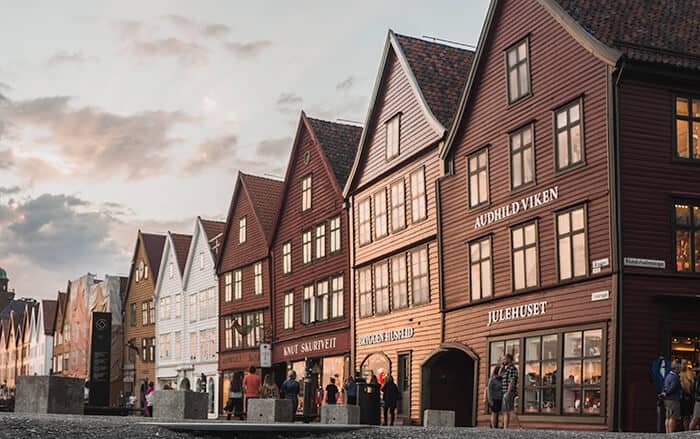 In the late 19th century, Bergen in Norway had the highest concentration of lepers in all of Europe. To deal with the problem, the city constructed three separate houses for the diseased, where they could be cared for by doctors and researchers studying the epidemic in an effort to discover its cause.

Now known as Hansen’s Disease, today leprosy is caused by the bacteria Mycobacterium Leprae, which causes symptoms such as loss of sensation, painful ulcers, skin lesions, and eye damage.

Most people think leprosy causes arms, legs, fingers, and toes to just break off. But it actually causes nerve damage, affecting sufferers’ ability to move their limbs. Frequent ulceration and long-term infections result in serious damage to fingers and toes, causing limbs to shorten. This is what started the myth that lepers lose entire body parts as a result of the disease.

Exploring the Leprosy Museum in Bergen

It was a gloomy, rainy afternoon when we decided to visit St. George’s Hospital, the oldest leprosy hospital now the leprosy museum in Bergen. The sombre atmosphere created by the dreary weather seemed to be the appropriate setting for our trip to the building which has since been converted into a museum, detailing the harsh reality of the cruel disease which plagued so many people in Norway’s beautiful coastal city.

Set amidst weathered, wooden buildings painted in pale greens and greys, the museum (called “Lepramuseet” in Norwegian) sat silently, awaiting my friends and me to approach and discover the sad truth behind Norway’s leprosy outbreak. As we walked to the entrance, we were unaware of just how horrifically the former hospital patients suffered. Little did we know we were in for a sorrowful experience that would leave us in a melancholic mood for the rest of the afternoon.

As I walked into the museum, my eyes scanned the large, hushed room with dark wooden floors. The first floor of the main building broke off into multiple rooms on each side and there was a staircase that led to a second floor with more rooms displaying the terrible manifestation of leprosy, treatments and how lepers lived, all in great detail.

Because the museum was previously a residential ward for leprosy patients undergoing treatment, we got a realistic feel of how cramped the residents’ living quarters really were.

We were greeted by a lovely guide who offered us individual pamphlets providing information on each separate room in the museum. (The pamphlets are in multiple languages, so if you can’t speak Norwegian, you can still understand the displays.)

There were a handful of other visitors in the museum, silently pacing from room to room, adding an air of mournfulness to the place. My friends and I, pamphlets in hand, slowly walked by the wooden walls of the museum, passing through each room, witnessing the progression of leprosy and how it was treated throughout time.

There was a complete absence of sound throughout the entire museum, as visitors read their pamphlets in silence and pondered the implications of the information they’d just absorbed. My friends and I gathered inside one of the small rooms which held a bed, some other furniture, and plaques on the walls describing the personal stories of the hospital’s former patients. We talked about the patients’ stories in muted whispers that pierced through the silence of the solemn surroundings.

Each room contained descriptions, sketches, pictures, to-scale models of leprosy-infected hands and treatment instruments. These gruesome details left me feeling sad and defeated by the end of our visit. I was really affected by the torment that the people had to endure during their infected days.

The museum offers a daily guided tour in English at 11:00 am, which includes entrance into St. George’s Church — a place of worship used by leprosy patients since they were unable to attend other churches. However, some churches, such as Fantoft Stave Church, were fitted with a “lepers door” to allow the diseased to attend. This door was constructed on the left side of the Church’s altar and was where lepers could come and receive blessings.

St. George’s Church opens once a day for a short time around 12:45 pm. If you don’t want to miss the church, be sure to contact the Leprosy Museum in advance or visit at 11:00 am so you’ll have time.

Leprosy has plagued and instilled great fear in humans as far back as ancient Egyptian times. In Europe, those infected with leprosy were shunned by society and forced to stand out so they could be avoided. Lepers were made to wear special clothing and ring bells to warn others they were close, causing those not infected to treat them with great disdain.

The disease is passed between human carriers through the air, but very few carriers actually develop symptoms. In the Middle Ages, the disease was commonly confused with other illnesses like herpes, skin cancer, and even psoriasis, resulting in many people being treated as lepers, cast away from society and forced to live in isolation in a leper colony.

Finding a cure for Hansen’s Disease

In 1873, Norwegian physician Armaur Hansen was researching leprosy and didn’t believe the disease was hereditary, as it was regarded at the time. He believed it was infectious and was caused by a bacterium transferred between carriers and therefore to stop the disease from spreading, the isolation of leprosy patients was vital.

Confining the diseased was successful and leprosy began to decline in Norway following his method. Today, Hansen’s Disease is treated with multidrug therapy over the course of 6-12 months. Patients aren’t contagious once treatment starts, so the days of condemning people to isolation in leper colonies are long gone.

Even though modern media often makes leprosy look comical (for example characters saving their seats by leaving their leprosy-infected arm behind) I left the museum feeling awful. While it truly shows the horrendous effects of leprosy in a sensitive way, there’s no hiding from the harsh reality of the terrible disease. It’s a sobering experience that will leave you feeling awful for the people who suffered from leprosy in Norway.

History about diseases in the past and how the medical community advanced through the treatment, testing, and study of diseases such as Leprosy (Hansen’s Disease) is a form of dark tourism. Not only does this history help educate us, it really demonstrates how far we have come by how we handle diseases and the people these diseases affect. If you are interested in reading more about dark tourism in Norway and the world.