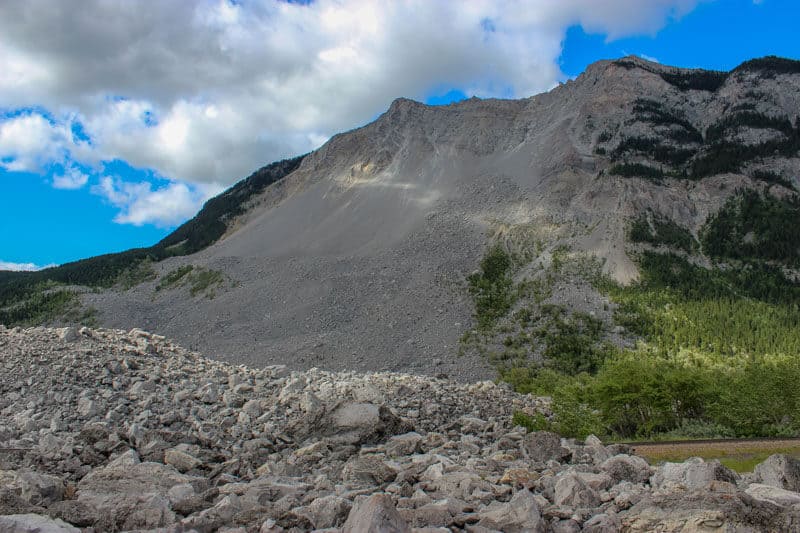 When I think of dark tourism, Canada is the last place that comes to mind. But when I really take a look around, I find there are way more sites historically associated with a tragedy here than I originally thought there were.

I always think of Europe as a haven for dark tourists. Especially since this part of the world endured many catastrophes. Everything from the plague, horrific volcanic eruptions, nuclear disasters, man-made famine and world wars, to name a few. But it turns out there’s a handful of dark tourism sites in Alberta, too.

Disaster has struck Crowsnest Pass in southwestern Alberta multiple times over the years. Nestled in incredibly beautiful mountain surroundings, the town of Frank was quickly becoming a booming mining town. Frank was home to over 600 residents.

Turtle Mountain, part of the mountainous setting, was already unstable due to erosion from water and ice creating deep cracks on the inside. The mountain had a reputation with the local aboriginal groups.

Who referred to it as “The Mountain That Walks” and it was just a matter of time before it moved significantly. Pair an already unstable geological structure with coal miners weakening the inside and destruction is inevitable.

During the early morning of April 28th in 1903, several miners were working the midnight shift. These workers chose to ignore the rumbling warning sounds. Turtle Mountain had reached its limit. 110 million tonnes of limestone came crashing down onto the homes of 100 residents.

This landslide ended up killing more than 90 people, while also trapping the working miners inside the mountain. Although stuck behind limestone, the miners managed to escape safely by digging themselves out of the rubble for 12 hours. This disastrous event became known as “Frank Slide”.

Venturing into the mines

I first learned about Frank Slide in junior high school when my class got to go on an epic overnight road trip to Frank. The trip turned out to be one of my favourite and most memorable field trips. We spent the night in the Frank Slide Interpretive Centre and took an incredible trip into one of the former mines — the Bellevue Underground Mine.

Each of us equipped with nothing but a miner’s helmet and a lamp, off we went into the darkness of an authentic coal mine. Being led deeper and deeper into the mine (1000 ft in total) we heard stories about life in Frank and the men who worked there during its coal mining boom.

The guides even discussed one of the disasters involving the Bellevue Mine — an explosion that took the lives of 31 men. At the end of the tour, we all turned off our lights and were cast into incredible and complete darkness. It was amazing! Tours of the Bellevue Underground Mine are available year-round.

As if having a mountain fall on your town isn’t enough of a fiasco, the nearby Hillcrest Mine also suffered Canada’s worst mine disaster. Explosions tore through the tunnels in 1914. The initial explosion occurred when a pocket of methane gas ignited, setting off a large coal dust explosion.

The Hillcrest Cemetery is the final resting place of the 189 men who were killed on that fateful day. My first visit to the cemetery really developed my interest in cemeteries. In the lives of people buried in old, moss-covered cemeteries filled with history, such as the beautiful Glasgow Necropolis.

Crowsnest Pass is a beautiful part of Alberta. With a dark history of natural and man-made disasters that cost many people their lives. Turtle Mountain still moves a little bit each year and is closely monitored by scientists from the Alberta Geological Survey.

Another landslide is not expected to occur unless “The Mountain That Moves” increases its speed. So visit Frank Slide today and walk among the incredible rubble that’s still scattered across the base of the mountain.