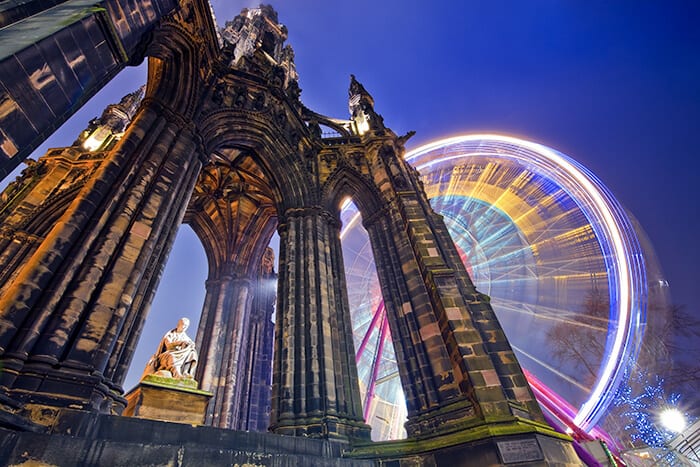 What gets narrower the higher you go and is terrifying for claustrophobic people who are also afraid of heights? That’s right — The Scott Monument in Edinburgh!

The gorgeous Gothic structure, dedicated to the life of Scottish author Sir Walter Scott, towers over Princes Street and Princes Street Gardens. It offers stunning views of Edinburgh…for those brave enough to climb it.

To reach the top, you’ll have to ascend the 287 steps which make up the spiral staircase. There are four separate viewing platforms along the way where you can pause and temporarily escape the dizzying steps.

What other monuments will make you sore the next day and force you to admit just how out of shape you really are? The Scott Monument in Edinburgh rises above the city at 200 feet and 6 inches tall and was nicknamed “The Gothic Rocket” by American Author Bill Bryson.

Fear aside, The Scott Monument in Edinburgh is one of my favourite structures. It catches your eye the very moment you step onto Princes Street. There’s always a bagpiper playing on the corner near the monument, confirming that you really have stepped into the world of Scotland.

The Scott Monument in Edinburgh has a striking black exterior, caused by air pollutants like soot becoming attached to the shale tower. Also known as the Walter Scott Monument, this stunning building features a white Carrara marble statue of the author and his loyal, beloved hound Maida. The entire monument was built in just a few years between 1841 and 1844.

The Scott Monument is the second largest monument in the world dedicated to a writer! If you’re not familiar with Sir Walter Scott by name, you might be familiar with his books.

He’s the author of Ivanhoe, Rob Roy, The Talisman, The Heart of Midlothian, The Lady of the Lake, Letters on Demonology and Witchcraft, The Bride of Lammermoor and Waverley, to name a few.

Not only was Sir Walter Scott one of Scotland’s greatest writers, but he was also credited as the founder of the historical novel genre. How impressive is that?

As you enter the museum, you’re welcomed by the Scott family crest carved into a wooden panel. The crest displays the family’s motto, “Reparabit comua Phoebe” which means, “The moon will shine again.”

Once inside, the small museum is reminiscent of a chapel, with wood panelling lining the walls separated by 4 arched window frames fitted with incredibly beautiful stained-glass windows.

The art inside the Scott Monument in Edinburgh

The beautifully coloured windows, which can only be appreciated from the inside, feature two of Scotland’s saints – Saint Andrew, the patron Saint of Scotland and Saint Giles. The other two windows are decorated with Scotland’s coat of arms, which showcase Scotland’s national animal – The Unicorn! The final window is adorned with Edinburgh’s coat of arms.

Once you’ve caught your breath and learned all about the life of Sir Walter Scott, it’s time to move on and continue climbing The Scott Monument. As you move up to the next viewing platform, you’ll notice the exterior of the monument is covered in several carvings — 64 of them to be exact. Each one is a character from one of Sir Walter Scott’s novels.

The design of The Scott Monument in Edinburgh was met with a bit of criticism. Charles Dickens was a big fan of the design, stating, “I am sorry to report the Scott Monument a failure. It is like the spire of a Gothic church taken off and stuck in the ground.”

If that isn’t a glowing review, what is?! Just kidding. Clearly, he hated it. I, however, love the style and architecture of The Scott Monument!

Striking views of Edinburgh from the Scott Monument

As you continue your climb up the Gothic Walter Scott Monument in the heart of Edinburgh, you’ll notice that with each viewing platform you reach, you’re greeted by increasingly stunning views of the city.

When you walk onto the windy platforms, you can see 360° views of many of Edinburgh’s iconic buildings, such as the Balmoral Hotel and its quintessential clock tower. In the background, Calton Hill and its monuments are on display.

As you walk around the platforms, towards the south you’ll see the steeple of St. Giles, the top of Edinburgh’s Camera Obscura and the historic Edinburgh Castle.

My favourite view from here is of the Kingdom of Fife and the Firth of Forth. On a clear day, you can see the famous bright red Forth Bridge that connects South Queensferry and North Queensferry. If that isn’t impressive, I don’t know what is! It certainly makes the climb to the top worth it.

I compare the climbing of The Scott Monument with opening Matryoshka dolls, also known as Russian nesting dolls, because the higher you go the smaller it gets.

Should you climb the Scott Monument if you are scared of heights?

I definitely recommend climbing up The Scott Monument in Edinburgh. But if you’re severely claustrophobic or terrified of heights, you might want to think twice before ascending all the way to the top.

If you could shrink as you went up the tower, as if you were inside the world of Alice in Wonderland, it wouldn’t be so bad. However, unlike Lewis Carroll’s novel, levels 2 and 3 of The Scott Monument aren’t home to a smarmy smoking caterpillar offering to help you easily fit into the ever-narrowing staircase.

I also recommend climbing The Scott Monument in Edinburgh during the offseason rather than around festival time. As you go higher, you reach a stairwell section only wide enough for one adult to fit. If it’s super busy, you might have to wait for people to come up before you can go down and vice versa.

Visit the Scott Monument in Edinburgh

Open all year with guided tours running every half hour

More Information About Things to do in Edinburgh

Want to be notified of new posts & get a monthly newsletter? Subscribe today!