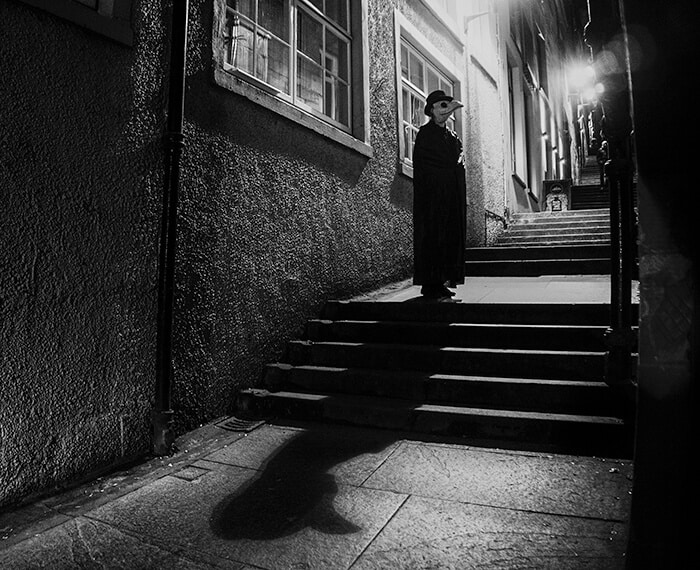 Deep beneath Edinburgh’s Royal Mile sits a dark secret. Once rife with the plague, a narrow alleyway is buried underground in Edinburgh’s City Chambers.

Mary King’s Close was located in the center of Edinburgh’s Old Town during the 17th century. The close was named in 1630 after Mary King, a fabric merchant who built her own business after her husband’s death.

Edinburgh was built within the medieval defence walls known as the Flodden Walls.

This meant that all of the buildings were built up; the wealthy lived at the top, and everyone else lived in near darkness at the bottom next to the sewage-covered streets. As a result, the Real Mary King’s Close is the perfect way to spend Halloween in Edinburgh.

Mary King’s Close was a street in Edinburgh sealed off from the world, leaving all the people suffering from the bubonic plague trapped beneath.

These people were quarantined and left to die. The residents in the city above went about their everyday lives. Did they even know there were victims of the plague dying beneath their feet?

Edinburgh’s history is full of dark tales and scary stories, but plague victims being buried alive is not one of them.

Mary King’s Close was bricked up, but all of the people who lived within – plague-infected or not – were no longer living within the street.

During the plague, the 17th-century residents that lived in what is now underground Edinburgh were treated really well. The close was quarantined, and locals would bring food and water to those suffering from the plague.

Mary Kings Close was abandoned in 1645.

Why was Mary King’s Close built over?

In Edinburgh’s Old Town, many of the closes were demolished and redeveloped. Many closes, such as Mary King’s Close, were partially destroyed at Cockburn Street, and the remaining structures were used as foundations for the Royal Exchange – Edinburgh’s City Chambers.

17th century Edinburgh was an unhygienic place, where sewage flowed freely through the streets. Without a proper sewage system to remove waste, every household owned a bucket that spent all day in the corner of the living quarters, rapidly filling with urine, feces and whatever else.

Then at a specific time of day, the warning cry “Gardy Loo!” would be bellowed before the bucket contents were thrown into the streets below. If you look closely at the sides of the roads in Mary King’s Close, you can see where the sewage ran down towards what was known as the Nor’ Loch.

Now the location of the beautiful Princes Street Gardens, the Nor’ Loch, was once a lake heavily polluted by sewage and household waste. It was also rumoured to be where suspected witches in Scotland were drowned — a practice known as “dunking.”

These unsanitary conditions created a breeding ground for flea-infested rats ridden with bacteria (specifically Yersinia Pestis Bacterium) in Edinburgh. Not before long this deadly bacterium spread further than the city and wreaked havoc on Scotland, just like it had done previously across the rest of Europe.

Contrary to popular belief, Edinburgh’s plague victims were not trapped in Mary King’s Close but were treated by people known as Plague Doctors. These doctors believed that the plague was caused by miasmas in the air and dressed head-to-toe in defensive gear to protect themselves from the infected air.

However, plague victims had to endure great pain at the hands of the doctor. He would cut off the top of each boil (usually located in the armpit or groin) and cauterize the wound by sticking a burning hot pole over it. Although incredibly painful, this form of treatment was quite successful.

After the plague passed through Edinburgh, Mary King’s Close and other closes (streets/alleyways) in the local area began to decay, transforming into dilapidated, overcrowded places.

The council sealed off the closes and built a place on top of them where merchants could conduct their businesses. As a result, some closes were destroyed while others stayed intact and were used as stable grounds to support the buildings above.

I highly recommend taking a Mary King’s Close tour during your holiday in Edinburgh. It’s an experience brimming with true history. You step into a genuine Edinburgh alleyway and see where people lived in the city’s past, led by an authentic character guide plucked straight out of history!

I always seem to get the maid or the foul clenger, but there are also the poet, Robert Fergusson, and the doctor. I’ve never been on a tour led by the doctor, but I feel he’d be a great person to follow around since he got really close to plague victims.

Once our tour began, the door closed, and we left the modern world behind, stepping into the dark, dank labyrinth of narrow alleyways that make up the historic Mary King’s Close. As our group walked down the stairs, the musty smell filled the air and my eyes slowly adjusted to the lack of light in the underground city.

Our guide, Hamish (better known as the poet Robert Fergusson), gathered us around the bottom of the stairs, and we stared down onto the steeply sloping road that leads to the Nor Loch.

Our first stop was a small room used as a home for impoverished people. The residents had very little living space, exposed dirt floors, and a damp, dark life.

We heard tales of a sewage bucket they kept in one corner of the house and imagined the terrible stench they couldn’t escape from since their homes were at the very bottom of the close.

We passed through the door toward other areas of the close while our guide relished in stories from his time there. We heard about real residents like Andrew Chesney, a wealthy saw maker, who enjoyed showing off the indoor toilet he referred to as his “thunderbox.”

He was so proud of his toilet. While using it, he would leave his front door open so people passing by could see.

Mary King’s Close was not wholly abandoned during the plague. Many residents remained living on the close or running their businesses.

The last remaining residents were the Chesney family. They had a business making saws. They were finally forced to leave in 1902 when the City Chambers opened up, and the close was sealed for good.

If you’re into the paranormal, you’ll enjoy the story about one of Mary King’s Close’s most famous ghostly residents. In 1992 a Japanese psychic, Aiko Gibo, was touring the close with a film crew when she spotted a young girl who said she’d died of the plague.

The young girl, Annie, said she was abandoned by her family and was looking for her lost doll. Aiko felt sad for poor Annie and purchased a Barbie doll donned with Tartan that now sits in a room within the close.

Many people have brought Annie gifts over the years, but I recommend giving a cash donation instead. The donations are collected throughout the year and given to the Royal Hospital for Sick Children in Edinburgh.

A trip to Mary King’s Close offers you a tour full of information from a well-informed tour guide who treats you to real stories from times past.

Although sometimes spooky, this isn’t a tour where ghosts and ghouls jump out at you. But if you’re looking for real history from Edinburgh’s past instead of a jump scare, a visit here should be on your must-do list for your visit to Edinburgh.

The Ghosts of The Real Mary King’s Close

Do you want to spend an evening with the ghosts in Mary King’s Close?

In addition to Mary King’s Close Annie, the underground street has had its fair share of ghost sightings and hauntings.

You can spend an evening investigating the spooky goings-on after hours and mingle with the ghosts that call the close home.

The Real Mary King’s Close is on High Street, 2 Warriston’s Close beneath the Royal Mile.

High Street is also called the Royal Mile, and Mary King’s Close sits underneath the City Chambers, across the street from St. Giles Cathedral.

Mary King’s Close is open seven days a week from 9:30 am to 9:30 pm. Hours vary in the winter, so check the current timetable on the official website before you visit.

How long is the Mary King’s Close tour?

The tour runs for approximately one hour. It is full of so much incredible history that the tour seems to go by very quickly.

The Real Mary King’s Close tour is top-rated. I highly recommend booking your place in advance to avoid disappointment.