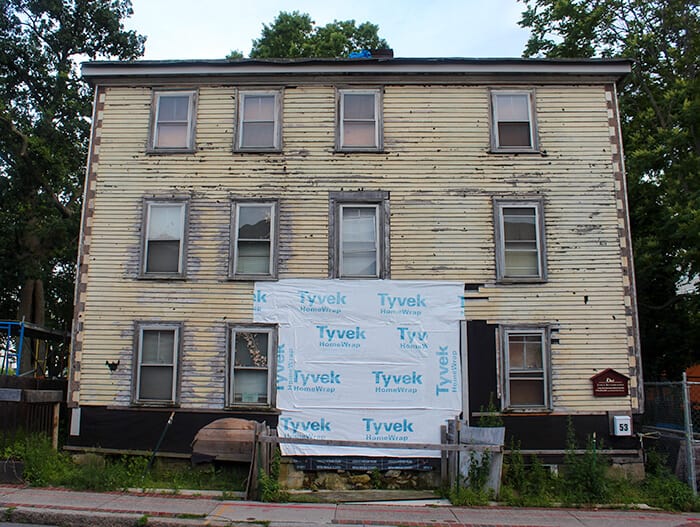 The Charter Street Historic District has a sinister history tied to the dark romantic writer, Nathaniel Hawthorne. In the district, on the corner of the Old Burying Point Cemetery, sits a large empty yellow house weathered by age, neglect and harsh New England winters. The Grimshawe House has a story to tell and I wanted to know more.

While walking through the Old Burying Point, my eye kept being drawn to the yellow house. Who owned it? Why was it empty? What history and stories did it hold? I know many Salem buildings are historically relevant, often associated with something from the city’s terrible past. Because of its location, I knew the building had to be important.

This historic house, situated inside the graveyard, was covered with scaffolding and signs of renovations that had long been abandoned. The house called over to me again and again and I found myself staring at it longingly, wanting to know more. During my exploration of Salem, I often passed the house and each time I felt drawn closer. I took a few photos with each passing, desperately craving to find out more about its history.

The history of the Peabody-Grimshawe House

I took one of Salem’s haunted history walking tours and asked the guide if she had any information about the house. Now called The Grimshawe House, because of its ties to two of Nathaniel Hawthorne’s short stories, the building was once home to the Peabody family.

Physician and dentist Nathaniel Peabody, his wife Elizabeth and their children lived there in the 1800s. Nathaniel also used the building as his dental practice.

The Peabody’s third daughter Sophia suffered from severe migraines as a child and her father often tried to help ease her pain with mercury. Unfortunately, the mercury caused even more health complications and Sophia spent years living as an invalid. However, this situation didn’t stop Sophia from living life to the fullest and she continued to study art and writing alongside her sisters.

During her time at the Grimshawe House, Sophia’s older sister Elizabeth introduced her to Nathaniel Hawthorne. Sophia and Nathaniel fell in love, eventually wed and the rest is history.

Related Post: Visiting the House of the Seven Gables in Salem, MA

Nathaniel was greatly inspired by the house on Charter Street, so much so that it features in some of his short stories. One such book is Doctor Grimshawe’s Secret, written in 1861 but left unpublished, as Hawthorne didn’t feel like the book was finished.

Unfortunately, Nathaniel Hawthorne died before the story was released. His son felt the world needed to see it and published it after Hawthorne’s death. I’m glad his son did publish it because Doctor Grimshawe’s Secret is a really interesting story about a doctor who created serums from spider webs.

In the story, the doctor’s study was overrun with spiderwebs, dust and evidence of severe neglect. The spiders owned the house and the people who entered were merely intruders in the spiders’ den.

In his book, Nathaniel Hawthorne references the gloomy effect the house had on the surrounding area and how the nearby graveyard added to the dreariness. The little house bursting with spiders helped enhance the spooky atmosphere which fills the house today.

The second unfinished story that references the house is The Dolliver Romance. I haven’t read it yet, but it’s also about an eccentric doctor. It makes me wonder just how bizarre and quirky Sophia Peabody’s dentist/physician father must have been!

Some people who walk by the old abandoned house take one look at it and assume it must be haunted because of its neglected state, boarded up windows and its proximity to a historic graveyard.

Salem has a lot of connections with Nathaniel Hawthorne’s books, such as The House of the Seven Gables. This house that inspired his novel is a real building that’s now a museum dedicated to the history of the house and Hawthorne’s book.

During my time in Salem, I learned that the Grimshawe House is privately owned and a developer wants to turn it into condos. Why is it always condos?

I don’t live in Salem so I really have no say in the matter. But I do hope the city preserves the building. The many people who love Nathaniel Hawthorne’s work, the intriguing history of the Peabody family and the preservation of historic buildings in Salem should be able to save it.