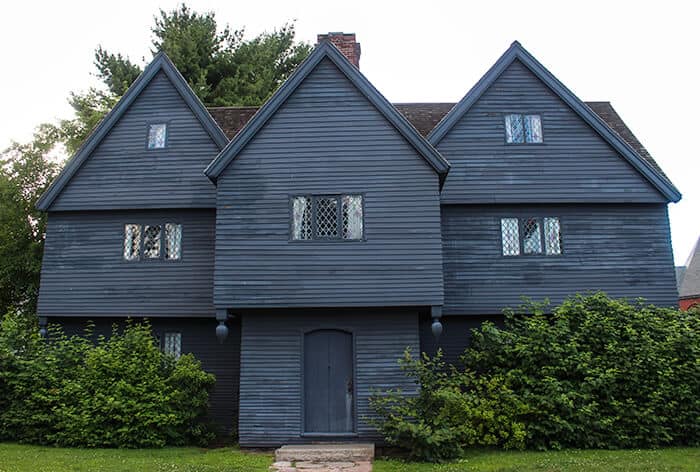 Standing on the corner of North Street and Essex Street, the striking black Witch House is the only remaining structure from the infamous Salem Witch Trials of 1692.

Luckily, the Great Salem Fire, which swallowed up most of the city in 1914, didn’t touch the McIntire District. This meant the Witch House and a handful of other beautiful historic houses survived the disaster unscathed and remained fully intact.

Many structures with ties to the witch trials that made it through the fire were torn down or destroyed. These historic buildings were not protected by any kind of historical society.

The Witch House almost met the same fate. The citizens of Salem were utterly ashamed of the harsh witch trial stains it left on the city’s history. Fortunately, the Essex National Heritage Commission was created, and members banded together to save the house.

The Witch House was once home to Judge Jonathan Corwin. He played a crucial role in the Salem Witch Trials and convicted several women and men accused of witchcraft.

During the time he served on the Court of Oyer and Terminer, 19 people were condemned to death by hanging. In addition to those deaths, hundreds of people were banished to jail to await their trials.

Due to the harsh conditions of the jails, many perished before they even got the chance to sit in front of the court.

Stepping Inside The Witch House

As I approached the 17th-century house, its black exterior, multiple gables and prominent brick chimney placed right in the centre made it stand out against all others nearby.

Even sitting next to the historic district, the Witch House still seemed out of place. After snapping a few photos of the iconic and aesthetically pleasing exterior, I headed towards the entrance at the back of the house inside the tiny gift shop.

To avoid the inevitable rush of tourists, I arrived just moments after The Witch House opened and attempted to pull open the door.

“Are they not open?”

I pulled again, this time tugging harder before the door burst open, and I was thrown back in shock.

“Oh, it’s just a little tight due to the rain,” the woman in the gift shop told me as I wandered inside.

The interior of the house was dark, and the floors creaked as I walked over to the gift shop counter. I scanned the walls, looking at all The Witch House souvenirs.

Little witch pins, dark postcards showing The Witch House in spooky foggy lighting, books on the history of the witch trials and all sorts of other witch merchandise lined the walls. I stood there thinking how appalled Jonathan Corwin would have been, knowing that this was what his home had turned into.

Self-guided Tour of The Witch House

The only option for me that morning was to take a self-guided tour. I usually enjoy self-guided tours because I like roaming at my own pace, taking as many photos as I want and trying to imagine myself living alongside the place’s original residents.

However, I definitely think that if you’re offered a guided tour of The Witch House, you should snap it up! You’ll get to ask your guide as many questions as you like and learn so much more than exploring on your own. If a guided tour is available the next time I’m in Salem, I’ll be sure to take it.

Inside The Witch House

The first stop was the kitchen, which had a brick fireplace that covered the entire left wall. When I was there, I could imagine women in their long dresses lifting up the large black pot hanging above the fire.

When I toured the House of the Seven Gables in Salem, I learned that women would soak their skirts in water to prevent them from catching fire when doing daily chores.

Along the opposite wall sat a table with several books and documents from the Salem Witch Trials, including a tattered copy of Memorable Providences, Relating to Witchcraft and Possessions written by Cotton Mather.

The author, a Puritan minister, living in Boston, wrote several books about witchcraft that were responsible for the people of Salem catapulting themselves into the hysteria of the witch trials.

Moving further into the house, I discovered a small room with a display case full of 17th-century witch trial trinkets. Some of the items were early forms of folk magic, such as Witch Bottles. These bottles were full of hair, fingernails and urine from everyone living in the home.

These bottles, along with sharp nails and pins, were placed inside larger clay bottles that would hang upside down over the fireplace to keep bad spirits and witches away. Other items, like bones, dolls and shoes, were placed within the walls and under the floorboards to protect the house and family from bad spirits.

The tiny room leads into the hall, which displayed medical recipes for concoctions like snail water which was used to cure rheumatism and treat pain. To make snail water, baked snails were added to the strong ale.

There was another book that held instructions for making water from cow dung, as it was believed dung was a useful ingredient for helping cure all kinds of ailments.

The rest of the house featured textiles, furniture and information on life in the 17th century. Everything from how people ate without utensils to how children would drink beer as it was safer than water.

The Puritans were strict parents were when it came to raising their children. Puritans believed that children were born stained with sin and had to repent and put full faith in God to get into heaven.

After the witch trials ended, Corwin continued practicing law in the general courts, dealing with cases of piracy and disputes among the citizens of Salem.

He also became a judge for the Superior Court of Judicature, which laid the foundations for the current judicial system in the United States.

Although Jonathan didn’t pay for his role in the deaths of the innocent who perished in the witch trials, tragedy still fell on his house and family. Ten out of his 12 children died within the first few years of their lives.

If you want to take a stroll through historic cemeteries in Salem to see the burial places of some of the witch trial judges, be sure to visit the Old Burying Point. To visit the grave of Judge Jonathan Corwin, visit Broad Street Cemetery.

I really enjoyed walking through the ancient halls of The Witch House, but I still had questions about it and the Puritans who lived in Salem before and during the witch trials.

I asked the woman who worked in the gift shop if the house was painted black when Jonathan Corwin owned it since, nowadays, it fits into the Gothic aesthetic and holds a sort of dark beauty.

She told me that black paint was very expensive back then and that the house was actually dark because of multiple coats of linseed oil. As it aged, the house got darker and darker.

The Puritans of Salem

She also mentioned that, despite what we think today, Puritans didn’t wear black and white. Just like the paint, black clothing was also very expensive at the time.

Most Puritans wore earthy-coloured clothing, giving them a more muted appearance. I’m not sure why Puritans always appear wearing black and white in books, pictures and films, including the 1996 adaptation of Arthur Miller’s “The Crucible.”

Why did the Puritans come to America?

What I found most interesting about the Puritans is that they fled to America after being persecuted for their beliefs. When they arrived, they chose to crucify anyone who didn’t follow their Puritan beliefs. Talk about hypocrisy.

The Puritans lived incredibly boring lives — drab clothing, cold New England winters, church eight hours a day, no dancing, no singing, no playing games, and judgement from your neighbours if you didn’t behave in a certain manner.

It was a tough life, and the hysteria that occurred during the witch trials made it even worse.

The Witch House is a beautiful building which gives a great insight into the life of a rich 17th-century family. The Witch House also offers a small glance into the witch trials in which Jonathan Corwin played a large part in.

If you’re looking for more information on the subject, I highly recommend taking a local history tour. These tours will delve deeper into the insanity surrounding the Salem Witch Trials of 1692.

How to Visit The Witch House