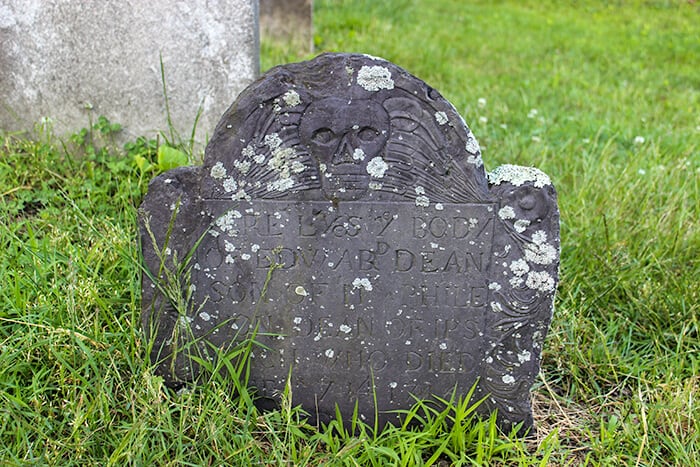 The Old Burying Point Cemetery, also referred to as the Charter Street Cemetery, is located right next to the Salem Witch Trials Memorial.

Teeming with a history that overflows between the weathered tombstones that are collapsing due to the ravages of time. The Old Burying Point is Salem’s oldest graveyard and one of the three cemeteries with ties to the Salem Witch Trials.

The cemetery is occupied by several notable residents from Salem, such as Captain Richard More, a Mayflower Pilgrim and Captain John Turner, who built the House of the Seven Gables.

However, the graveyard is also the final resting place of accusers who were directly responsible for the horrific deaths of suspected witches who lost their lives in the 1692 Salem Witch Trials.

One such resident of the graveyard is Justice John Hathorne of the Witchcraft Court. John Hathorne was known for his combative prosecution techniques, based heavily on spectral evidence, and claimed that those who practiced witchcraft were associating with the Devil.

John Hathorne is the ancestor of American novelist Nathanial Hawthorne, who wrote classics such as “The Scarlet Letter” and “The House of the Seven Gables” (which is a real house in Salem that you can visit!)

He added the “W” to his surname to distance himself from his cruel predecessor and his ties with the Salem Witch Trials.

I visited the cemetery at 5 am when the sun was rising as the rest of Salem slept. The beams of sunlight shone brightly through the gaps between scattered gravestones, offering a peaceful and calming atmosphere.

I could fully respect the history buried within the graveyard and took in all the memories and words of those who died during the 1692 witch trials.

As I approached the graveyard from the entrance next to the Salem Witch Trials Memorial, I was greeted by direct quotes from trials that had been cut short, symbolizing the early deaths of those who were tried as witches.

One of the Salem Witch Trials Memorial quotes that stood out to me was from Bridget Bishops, the first victim to be executed, and simply read: “I am innocent.”

Part of the evidence used against Bridget was that workmen found poppets (small human-like dolls now associated with witchcraft) buried within the walls of her home.

However, for centuries people had been placing items such as dolls, bones, clothing and shoes underneath the floorboards and behind the walls in their homes as a blessing and to protect all who lived there from bad spirits.

However, this was deemed sufficient evidence for the cruel witchcraft judges in Salem to condemn Bridget.

The Salem Witch Trials Memorial is a small space dedicated to the victims of the Salem Witch Trials. The commemorative area is made up of a low stone wall that surrounds 20 granite benches, each carved with the name of a victim who lost their life during the trials and the date of their execution.

As well as acting as memorials, the benches also signify the immense weight of the rocks used to crush Giles Corey to death during the trials.

The Salem Witch Trials Memorial also houses six black locust trees, the tree species some victims were believed to have been hanged from, acting as a memory for the injustice that occurred during the trials.

After a respectful viewing of the Salem Witch Trial Memorial, I made my way toward the gate that led to the back of the graveyard.

As I was the first visitor of the day, I opened the metal gate that sealed the cemetery off from the rest of Salem and took my first step onto the soil path toward the aged gravestones.

Within the graveyard, I discovered gravestones of various sizes. There was usually one large headstone paired with a smaller footstone used to mark the foot end of the person buried below. I spotted several headstones with markings that grew more intricate as the years progressed.

What looked like a skull in the center of the headstone from a distance would resemble an angelic-looking person on the newer headstones. This made it easy to tell the age of the headstone without reading the date engraved in the granite.

As I continued walking along the quiet path, I approached a tree crowded with fragile, worn gravestones. Many were pushed together due to the tree’s massive roots, which crammed the stones into smaller and smaller spaces as they grew.

Located directly next to the Old Burying Ground Cemetery, close to the main entrance on Charter Street, is a yellow house (from age) that appears to be abandoned and falling apart.

The house is currently showing signs of being under renovation. But when I visited, it was almost as though the renovations had also been abandoned.

I snapped tons of photos of this beautiful dilapidated building, wondering what it was for and why it sat so close to the edge of the cemetery.

The copper plaque, located along the path from the main entrance of the graveyard, answered my question. It read, “The Grimshawe House” — a residence with its own important history as the former home of Nathanial and Elizabeth Peabody, who had three children, including Sophia Peabody.

Sophia was a woman who had many health issues following being given a rattle made of mercury when she was a baby.

The best thing about the Salem Witch Trials Memorial being next to the Old Burying Point Cemetery?

The fact that callous accusers and judges who are buried in the graveyard are overshadowed by the innocent men and women who lost their lives during the trials.

Just like in Europe, graverobbing was common in Massachusetts. As many graves were marked with both headstones and footstones, grave robbers knew the exact position of the body so they could dig it up quickly and accurately.

To combat these body snatchers, the Old Burying Point built tabletop tombs above the buried remains of important figures, such as Bartholomew Gedney, another Salem Witch Trials judge.

There were several other specially crafted tombs that protected entire buried families from the prying hands of robbers.

Where are the Salem Witches Buried?

If none of the witches were buried in the cemeteries in Salem, what happened to their bodies? The Puritans believed suspected witches weren’t worthy of Christian burial and were doomed to hell.

This is where the term “Witch Pits” comes in. The witches of Salem were buried in pits so shallow their limbs were poking through the ground.

Once the trials were over, the families of those buried in shallow graves were able to dig up the bodies and give them proper burials in their family plots and private gravesites.

The Old Burying Point Cemetery is open from dawn until dusk and is free to enter. Ghost tours and historical walking tours also pass through the graveyard, recounting tales of the past and teaching you all about the history of the cemetery and its residents.

The Old Burying Point is located behind the Peabody Essex Museum on Charter Street, directly next to the Witch Trials Memorial.