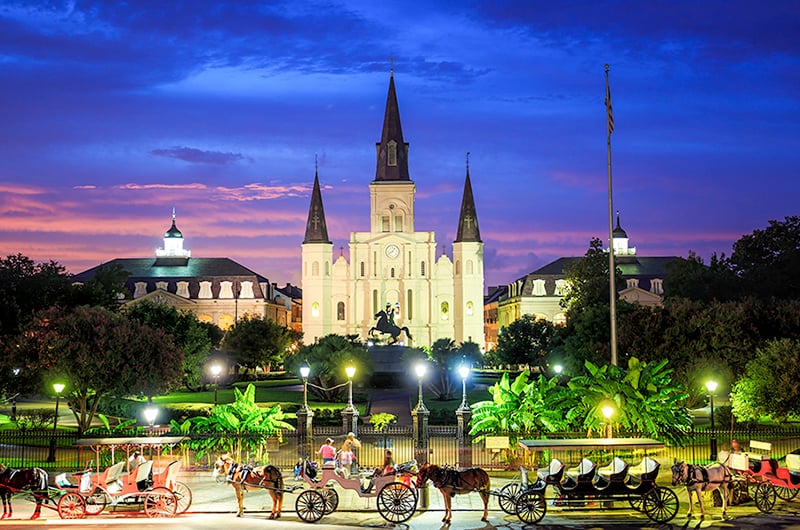 In fact, there’s so much weight given to the dark side of the city that it’s common for landlords to mark their properties available for rent as being “Haunted” or “Not Haunted”, so potential tenants know when they’re letting themselves in for.

That’s not the only evidence that superstition is strong in New Orleans. Other oddities include putting doorknobs and keyholes upside down, something which you’ll find on almost every door in the city.

The reason behind this is that many locals believe the recently buried, dead or vampires have the power to open/unlock houses and enter. And to combat this, you need to do something to confuse the spirits, such as installing a lock or keyhole upside down.

Whether you’re into graveyards, vampires, ghosts, voodoo, or just the generally frightful, New Orleans has got you covered!

Admittedly, I knew nothing about voodoo before I went to New Orleans. Up until then, I’d only seen it on TV and in movies, where it’s always depicted in a negative light. But seeing how voodoo is practiced in New Orleans and Louisiana as a whole really opened my eyes.

Evil voodoo in the media

In the media, voodoo is largely represented by people creating evil voodoo dolls, crafting malevolent potions and sacrificing innocent animals so witch doctors can cause chaos in someone’s life.

It all sounds horrible…yet strangely exciting!

New Orleans Voodoo is far from how it’s shown in the media. When you take a closer look and really learn about New Orleans voodoo (or Louisiana voodoo) you’ll see it’s just a normal religion which fuses voodoo from Africa and Haiti with the Catholic religion of New Orleans, thus creating the New Orleans voodoo.

Today in New Orleans, voodoo is still often misunderstood by outsiders. It’s not until you take a closer look at what the religion really means that you can see it for what it truly is.

But even when you have an understanding of it, it’s still easy to be overwhelmed by all the seemingly strange items for sale inside voodoo museums and shops, such as chicken feet, animal bones, alligator heads, love potions, and real voodoo dolls!

Upon visiting the New Orleans Historic Voodoo Museum, my friend Chris and I were greeted by a warm, friendly woman who was excited to have visitors. Chris and I listened as she told us a little about the history of voodoo. After being enlightened, we stepped into the museum to admire the incredible shrines and relics which make New Orleans voodoo what it is today.

As we walked from room to room, our eyes were overwhelmed with the odd trinkets (including voodoo dolls pinned to the walls) that took up every available space.

I could understand why, if you were looking from the outside, voodoo could be seen as a scary or dark religion. But, as we walked around taking in all the history and seeing how voodoo has influenced life in New Orleans, we began to understand and respect it, like you would with any religion.

The Truth About Voodoo

If you’re in town, be sure to visit the New Orleans Historic Voodoo Museum so you can see the shrines dedicated to strong, important women and men in the voodoo practitioner community.

You’ll see shrines commemorating voodoo queens made up of a photo of a woman, known as a voodoo priestess, surrounded by dolls, statues, charms, hair elastics, coins and all sorts of other offerings.

Although I was disappointed it wasn’t the scary, evil craft TV had led me to believe, New Orleans voodoo is actually a really lovely religion tying nature and spirituality together, filled with great history and mythology. They do create voodoo dolls, but they’re used for good reasons, such as help with fertility, bringing good luck, promoting good health and so on.

St. Louis No. 1 Cemetery (only accessible as part of a tour) — Basin at St. Louis Street

Vampire stories (and possibly vampires!) run rampant throughout New Orleans. You’ve probably heard of Anne Rice’s book-turned-feature-film “Interview with the Vampire” and the ever-popular “True Blood”, which took place in Louisiana. There are many stories about how vampires came to New Orleans, but my personal favourite is about the Casket Girls, or casquette girls, of New Orleans.

The Casket Girls of New Orleans

During the colonization of Louisiana, France sent women overseas to marry the French colonists already living in the Deep South. These women were referred to as “casket girls“, due to their oddly-shaped luggage which was shallow and long, just like a coffin.

After a rough six-month voyage at sea, the women arrived horribly ill and their delicate, pale skin quickly burned in the hot Louisiana sun. The girls stayed with the Ursuline nuns until they were married off to local men.

In addition to rumours spreading about the girls’ sickly appearances and coffin-like luggage, the third floor of the convent where the girls lived prior to their arranged marriages had the windows barricaded with wooden boards. This led people to believe the girls were vampires.

However, the Ursuline nuns said boarding up windows was common during the 1700s when the casket girls arrived in Louisiana, to protect properties and the people within them from hurricanes since purpose-build hurricane shutters hadn’t yet been built.

As the women were married off, a lot of them were mistreated by their husbands or forced into prostitution, resulting in France demanding their immediate return.

The girls wasted no time and rushed back to their home country without even packing their things, leaving in their wake an attic full of their empty casket-shaped luggage. This sealed the deal with the people of the Louisiana colony and the stories of vampires coming to and living in New Orleans became ingrained in their spooky history.

Want to hear more about the Casket Girls? Listen to my podcast below

New Orleans is a haven of paranormal activity, apparition sightings and ghost stories. Here are the spooky tales which scare me the most.

Related Post: The Top Haunted Places in New Orleans You’ve Got to Visit

The Ghosts in New Orleans Hotels

During the tour, we learned about the casket girls, the undead and the ghosts that haunt various locations around town. As our group walked down Royal Street, getting closer and closer to the hotel Chris and I was staying at, I started to get nervous.

We stopped at a hotel two doors down called the Andrew Jackson Hotel. It was a quaint French Colonial-style building, complete with blue shutters, and was formerly used as a boys’ boarding school. In 1794, a fire devastated most of the buildings in the city, including the boarding school, killing five boys who lived there.

Our tour guide explained how the boys now haunt the Andrew Jackson Hotel. Guests have reported hearing them playing in the courtyard and turning on the water in the bathroom to distract guests, while the other boys turn on the TV. The creepiest story of all is of guests leaving their cameras out at night and waking up to discover photos taken from above of them sleeping in their beds.

This was enough to scare me for the rest of my visit to New Orleans. I’m lucky that Chris is such a good friend and didn’t complain once when I forced him to keep the lights on at night because there was no chance I was sleeping in the dark with ghost children so close by.

I’d love to stay at the Andrew Jackson Hotel, as well as any of the other highly haunted hotels that take over the French Quarter. But I feel I’d regret it the moment I heard a noise or saw a light flicker.

Go on one of the many ghost tours in New Orleans to hear more tales about the ghosts that haunt the city.

One of the best things to do in New Orleans is to take a historic tour. I only visited one graveyard while in New Orleans, the famous St. Louis Cemetery No. 1 in Treme, just on the edge of the French Quarter. This graveyard is only accessible as part of a tour group, due to past instances involving people vandalizing tombstones and desecrating the graveyard.

The tour I went on was horrible because I cannot handle the heat. A mix of wearing black and being Canadian meant I was in for a day of suffering. The tour was in the middle of a hot, sunny afternoon and I regretted every minute of it.

The air was thick with the heat and we were all incredibly uncomfortable walking through the graveyard, with blazing sun rays beaming down on us and the weathered, crumbling tombstones tightly packed around the grounds of the cemetery.

However, it was still a cemetery and I really revel in hearing the history and stories cemeteries and their permanent residents. The tour and the tour guide were awesome – but the insane amount of heat made it difficult to fully enjoy.

As we entered the cemetery, we were greeted with rows of above-ground tombs. When the settlers first came to New Orleans, they buried their deceased below ground. But as the grounds were mushy and wet, the coffins would inevitably pop up above ground.

People tried to combat this by placing rocks on the coffins and drilling holes into them, so they’d fill with water and stay below ground. But nothing worked and the coffins refused to stay buried.

As a workaround, the graves were built above ground, similar to Spanish vaults, and thus the above-ground tombs became part of New Orleans’ cemetery landscape.

Because of the intense heat in New Orleans, a body inside a tomb is entirely cremated over the course of a couple of years. This allows multiple family members to use the same tomb over generations.

Before a new body is placed within the tomb, the previous inhabitant’s cremated ashes are swept to the back and out a hole that leads to the ground, thus sending the ashes back into the earth.

As New Orleans is a city-run on superstitions, we were advised to cross the threshold backwards to prevent evil spirits from following us out as we left the cemetery. We left and I bolted for a shady area where I could rest before Chris and I headed back into the French Quarter to treat ourselves to some delicious southern food and more spooky stories.

New Orleans has so much to offer in the world of the supernatural. There’s a staggering number of intriguing places to explore and investigate, as well as plenty of opportunities to learn about how the residents of New Orleans dealt with the dark stories of creatures in the night. I highly recommend checking out one of the ghost tours listed above for an even more incredible history of the city.

More Spooky and Haunted Things to do in New Orleans