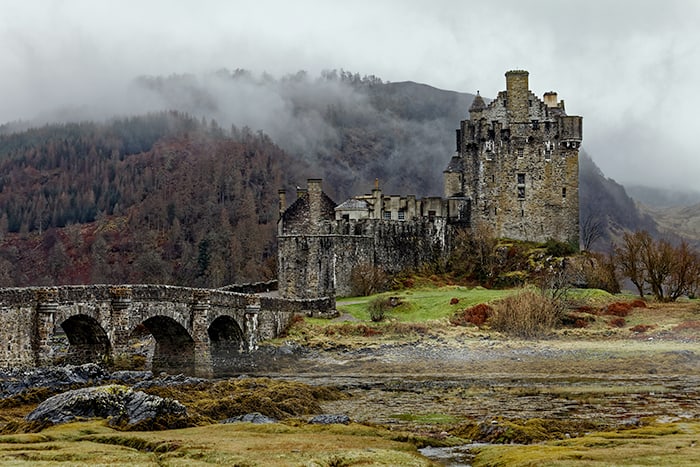 With a richly historic landscape full of imposing medieval castles that witnessed perilous wars, The Great Scottish Witch Hunt and a deadly Black Plague, Scotland has an abundance of castles with a dark history.

Paranormal tales, including one of a ghostly dog, run rampant throughout the haunted Scottish castle. According to legend, a fire devastated the castle and caused the death of a nanny and two young children.

Many say this terrible event is the reason behind the sounds of children playing that can be heard throughout the renovated castle today. Although the spine-chilling sounds have been heard in several different rooms, room 9 is said to be the most haunted.

As well as the sounds of playing children, heavy footsteps, unaccounted for screams and intense crying can also be heard throughout the castle.

There’s a hotel located directly next to Airth Castle Hotel and it’s easy to mix the 2 up. Be sure to book a room inside the Airth Castle hotel for a spooky experience!

Dornoch Castle, located just north of Inverness, was built in the 1500s and was formerly a castle, a school and a jail before it was transformed into the hotel it is today. It’s a great choice for anyone who wants to stay in a haunted castle overnight in Scotland.

The eerie rumours which revolve around Dornoch Castle Hotel involve Andrew McCornish, a thief who was hanged for stealing sheep. His spirit is said to roam around the hotel, quietly watching people as they sleep. According to legend, the ghost was identified as Andrew by the local sheriff after he heard a detailed description.

The castle was exorcised in 1922, but many say it was unsuccessful. Would you stay at Dornoch Castle Hotel, one of the most haunted castles to stay in Scotland?

Noted for being one of the most haunted castle hotels in Scotland, Barcaldine Castle has a seriously dark past.

The Laird of Barcaldine, Donald Campbell, was one of the victims of the brutal Glencoe massacre between Clan Campbell and Clan MacDonald. The Campbells ruthlessly slaughtered the MacDonalds as they slept. You can read more about the horrific Massacre of Glencoe in my post on dark tourism sites in Scotland.

Don’t be too hard on Duncan though, he had no idea his brother was dead. I can’t imagine he would have been so accommodating if he did know!

Rumour has it that the spirit of Donald Campbell haunted his brother at the Barcaldine Castle out of anger after taking in his murderer.

If you want to stay in a haunted castle overnight in Scotland, be sure to stay in The Caithness Room at The Barcaldine Castle. Guests of that room often report seeing ghostly apparitions or the sensation of someone sitting on their bed!

Once owned by the MacDuff Earls of Fife, Fernie Castle was built in the 15th century and has a horrible past filled with dismal tales. Now known as one of the most haunted castle accommodations in Scotland, Fernie Castle is the home of an apparition also known as The Green Lady.

The Green Lady is tied to a girl who ran to the castle in an effort to escape from her enraged father. Stories say that she was in love with a man her father did not approve of. Her father caught up with her at Fernie Castle where she later fell to her demise down three storeys.

Not only can The Green Lady’s spirit be seen wandering the west tower of Fernie Castle, one of the haunted castles to stay in Scotland, but she has also extended her turf to cover several hotel rooms. Guests say her spirit interferes with the lights and electricity in their rooms.

Dalhousie Castle is known for being the most haunted castle in Scotland. As it’s Scotland’s oldest inhabited castle, Dalhousie has its fair share of guests who have never left.

Once surrounded by a moat to protect it from ground attacks, the lowest level of the castle back in the 15th century was a dungeon only accessible by rope. Prisoners used to be lowered into the dungeon where they served their sentences in the damp darkness with no hope of escape.

One of the most famous ghosts of Dalhousie Castle is Lady Catherine. A former mistress of a laird from Ramsay, she was said to be locked up by the laird’s jealous wife when she discovered her and left to die in one of the castle’s turrets.

The ghost of Lady Catherine is known as The Grey Lady, who’s often seen in the same place she died. Look for her in the windows of the turrets when you’re admiring the castle from the outside.

You should spend Halloween in Edinburgh at Dalhousie Castle! It would be so spooky and really add to your Halloween festivities.

If you’re looking to stay in a haunted castle overnight in Scotland but don’t want too much of a fright, consider staying at Mansfield Castle Hotel.

The Fowler family purchased the castle from the Ross family in 1890 and began some significant renovations in 1902. Although the Fowler family’s bodies left the castle after their deaths, the spirits of the family are said to have remained.

Mrs. Fowler is rumoured to linger in the hotel whenever renovations are taking place. Her ghostly apparition has been seen by many staff and guests. But instead of haunting those spending the night in a haunted Scottish castle, she’s always more concerned with the changes that are happening within what used to be her home.

Located in the Scottish Highlands, Tulloch Castle dates back to the 12th century and is home to several ghosts who linger within its ancient walls. Highly regarded as one of the most haunted Scottish castle hotels, Tulloch Castle gives anyone interested in after-dark paranormal activity the chance to sleep in a haunted castle.

Formerly the home of Clan Davidson, the castle features a secret tunnel connecting the basement of Tulloch Castle to Dingwall Castle. Although it’s inaccessible due to the collapse of the haunted castle in Scotland, its dungeon remains intact and you can visit it as part of a tour.

Tulloch Castle’s, one of the haunted castles to stay in Scotland, room 8 is reported as being the most haunted room at Tulloch Castle. Rumours of icy cold spots, disembodied loud footsteps and mysterious rattling doorknobs are all commonly experienced by most guests who stay in that room.

The famous ghost at Tulloch is known as The Green Lady. She’s said to forlornly roam the halls, following her fatal fall down a flight of stairs during the time Clan Davidson lived in the castle.

Culzean Castle in Ayrshire is said to be haunted by a number of ghosts. Guests of the Eisenhower Hotel at Culzean Castle have heard the faint sounds of ghostly bagpipes during stormy, tumultuous nights.

Do you want to spend the night in a haunted castle that has connections to Mary Queen of Scots? Borthwick Castle took in the infamous Scottish queen when she sought refuge in the late 1500s.

The Red Room in the castle is rumoured to be haunted by a young woman who fell pregnant by one of the Lords of Borthwick. Legend says she was gruesomely stabbed with a sword to her pregnant belly and left to die.

As one of the Haunted castles to stay in Scotland, several guests have reported the sensation of being watched and regularly leave feeling sick.

More Information about Spooky & Haunted Things to do in Scotland