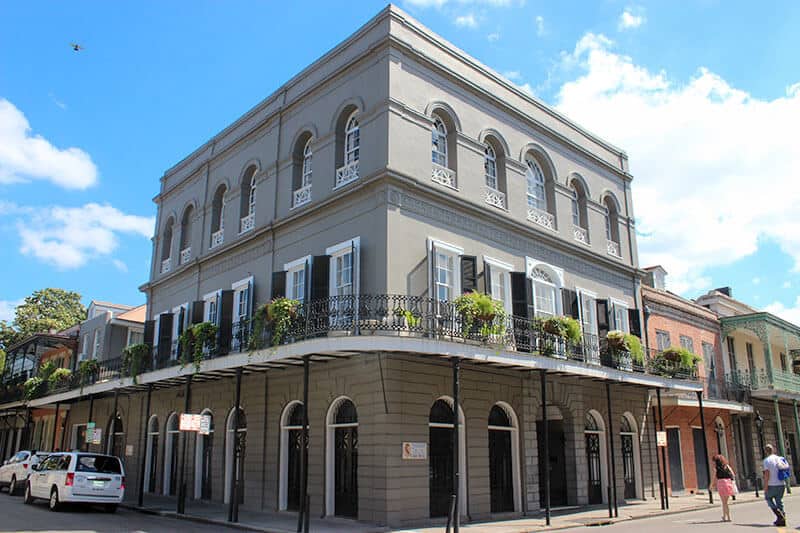 Nicolas Cage and I have a few things in common. We both love haunted houses, New Orleans and how The Big Easy is a place unlike any other. Nicolas Cage loves haunted houses so much that he briefly owned the LaLaurie Mansion! More on this below.

To quote him in an interview with The Advocate, “New Orleans is not like anywhere else in the world. There’s a confluence of culture, spirituality, cuisine, and you know that it’s just its own special place.” I love Nicolas Cage. Though my love is more for the constant memes people make of him than any of the films he’s been in. But I want you to know that I paid for and sat through the entire film “Wicker Man”. So I feel I can sustain anything Nicolas Cage throws at me!

I originally decided to go to New Orleans for the Jazz Festival. Plus I wanted to experience all the creepy things the city has to offer. New Orleans also has a lot of filming locations. I took advantage of this and went on a mini-tour of several filming locations from my favourite shows.

As a fan of horror, I really enjoyed American Horror Story (seasons 1-3 only). Season three featured several New Orleans filming locations I wanted to visit. There are a few other TV shows and movies I love (Interview with the Vampire, True Blood and Treme, just to name a few) that were filmed in Louisiana that I really wanted the chance to see.

When planning my trip to New Orleans, I discovered filming location tours existed and I was eager to get on one! Unfortunately, because I was visiting during one of New Orleans’ most popular tourist seasons; second only to Mardi Gras, the tours were fully booked during my entire stay. I was a bit disappointed but decided to book some others, including a ghost tour in the French Quarter.

This is when I first learned Nicolas Cage loved New Orleans as much as I did.

Be sure to listen to the podcast associated with this post below!

Related Post: The Most Haunted Places in New Orleans

The gruesome past of the LaLaurie Mansion

On the ghost tour, we headed down to Royal Street, stopping at a few filming locations from random shows and movies along the way. Until we reached the house I’d been dying to hear about. American Horror Story first introduced me to LaLaurie Mansion and Madame LaLaurie, portrayed by the incredible Kathy Bates. I found out that the mansion was a real location and that Kathy Bates’ character was based on a real person.

I was completely enthralled by the stories of the horrible woman and wanted to see the mansion in real life. I’d already researched the house and Madame LaLaurie so much that I knew almost everything. Hearing the horror stories while standing outside the mansion where she committed the atrocities really took it to another level.

Madame Delphine LaLaurie was a cruel woman who married a physician from France, named Leonard Louis Nicolas LaLaurie. Their marriage was a tumultuous and unhappy one which ultimately ended in Louis leaving Delphine.

This made her incredibly mad and she turned to torture her slaves by starving them and chaining them in the upper part of her house. Several horrible experiments were done to the slaves, such as breaking bones then resetting them in different positions, drilling holes into their heads and covering their bodies with honey and ants.

It wasn’t until one of Madame LaLaurie’s slaves fell to her death that the LaLaurie Mansion was investigated. During the investigation, all of Delphine’s slaves were set free. But, like something straight out of a horror movie, Delphine got her family members to buy back each and every one of her previous slaves, forcing them to return to the horror they’d briefly escaped.

It’s rumored that one of the courageous women forced to live in the LaLaurie Mansion as a slave set a fire that resulted in the townspeople discovering more about the horrors Delphine committed and finally driving her out of town.

Delphine LaLaurie was a vile woman who, unfortunately, was not truly punished for the disgusting cruelties she committed to the human beings she forced into slavery. What went on inside the LaLaurie Mansion is a horrible section of history that’s now part of New Orleans’ dark past.

Related Post: The Dark Side of New Orleans – Spooky Sites You’ve Got to Visit

The horrors live on

Following its sordid past, the LaLaurie Mansion was briefly turned into apartments. But the horrors didn’t stop. Residents claimed the mansion was haunted and they could hear moans, cries, screams, and footsteps throughout. Then one day, the landlord was found brutally murdered in his room. During investigations, several people said he claimed to be haunted by what he referred to as a demon.

The LaLaurie Mansion became known as “the haunted house on Royal Street”, tormented by its horrible past.

Does Nicolas Cage own the LaLaurie Mansion?

Nicolas Cage was also fascinated by the mansion’s ghostly past, so much so that he bought it. So, yes – Nicolas Cage did own the LaLaurie Mansion. According to our tour guide, Nicolas only spent one night in the house because he could hear all sorts of ghostly sounds.

These sounds and disruptions scared him too much to stay a second night. The following night, he rented a place across the street and let his friends have a party in his new mansion. I don’t know how true this story is since I don’t know Nicolas Cage personally. So, unfortunately, I can’t get him to confirm it. But it’s fun to speculate and think that the house was too scary for even a fan of haunted places.

Nicolas Cage didn’t own the mansion for very long. Shortly after, he claimed bankruptcy and the house foreclosed. It’s currently privately owned by a rich businessman from Texas and the house is unavailable for public visits.

An unusual discovery at St. Louis Cemetery No. 1

A few days after the ghost tour, I headed to the popular St. Louis Cemetery No. 1. I was really interested in seeing the tomb of Marie Laveau, also known as the Voodoo Queen of Louisiana. Marie Laveau was also a character from American Horror Story, played by the amazing Angela Bassett. But I’ll come back to her and her mystery tomb in another post.

I walked around the beautiful, old and incredibly hot sun-filled cemetery hearing all about the famous residents buried there. As I learned why all the tombs are above ground and the incredible history of the place, we stumbled upon a very peculiar looking tomb that really stood out.

Guess who has a tomb ready and waiting for his body in New Orleans’ oldest cemetery? That’s right — Nicolas Cage! He has quite a unique looking tomb — it’s all white and in the shape of a pyramid. It’s weird to say I was able to visit a celebrity’s gravesite while they were still alive.

I really loved learning how Nicolas Cage is woven into New Orleans. I’m sure there are a lot more links I’m unaware of. There must be more connecting Nicolas Cage and New Orleans! I am eager to find out as much as I possibly can about the mysterious man and my favourite city.

More Spooky and Haunted Things to do in New Orleans