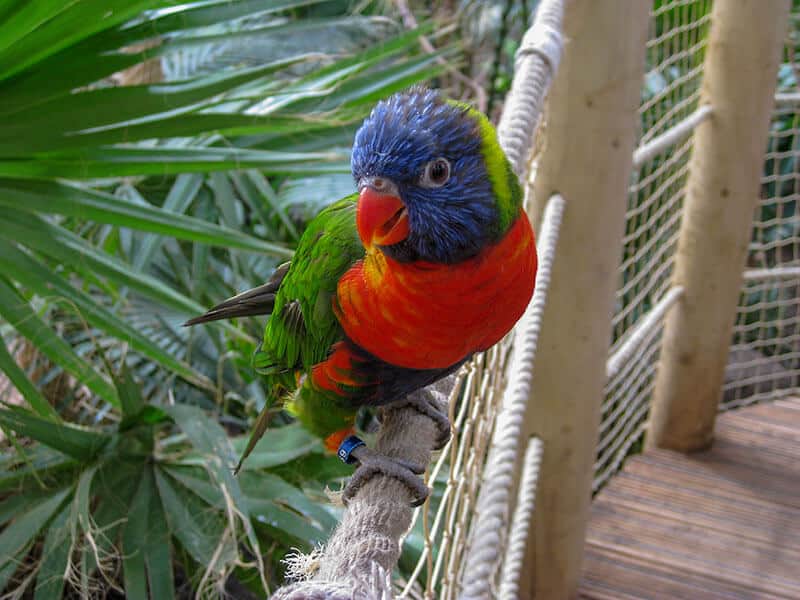 Edinburgh has an abundance of really cool visitor attractions which offer unique job opportunities. I’ve always been drawn to jobs where I can educate people about the place in which I’m working. Like a museum bursting with history, an art gallery flowing with culture or a zoo brimming with animals! As someone interested in working in animal conservation in the future, I sought out a temporary position at Edinburgh Zoo.

My mind was consumed with thoughts of working at the wildest visitor attraction in Scotland. I didn’t care what position I had or what I’d be doing. I just knew it would be a really cool place to work! I’d previously applied for an administration job, but they needed someone to start before I arrived in the UK, so I didn’t get that position.

Thankfully, someone passed my CV onto another department that was looking for gift shop employees to start around the time I would be in the UK. Although I didn’t originally apply for this position, I was definitely interested in an interview.

It was the Edinburgh Zoo. I’d do anything to work there!

Even though I was legally allowed to work in the UK, I was a bit worried that having a temporary visa would scare some employers away and make my chances of getting a job lower than someone living in the UK. (If you’re interested in working in the UK while travelling, take a look at my post on how to get a UK work visa.) But Edinburgh Zoo regularly hires temporary workers from various countries across Europe, so I had my hopes up.

The interview went well and a few days later, when I was walking down busy Princes Street, I received a call saying I got the job. I remember being so happy that I danced in the street!

A world of experiences working at Edinburgh Zoo

I don’t remember much of my first day, besides how immensely sore my feet were from standing on them all day. But I do remember stressing because I couldn’t easily recognize the money. I started working on the till in the main gift shop and tried to be as nonchalant as possible when giving change. Since I was dealing with money so often, I learned all the coins in no time.

Another thing I remember is suffering from what I deemed the “Scottish Plague”, which is really just a very bad cold. My immune system was not prepared for so much contact with money and children and it just couldn’t keep up. I remember eating chips (fries) for lunch one day and I couldn’t taste or smell them at all. It was a real shame.

I’d often walk around the zoo and familiarize myself with where the animals were. I had a few favourites I’d try to visit during each shift. One that stands out was an adorably ugly marabou stork that looked like Mr. Burns from The Simpsons. I loved him so much because he was so ugly it was endearing. Sadly, he wasn’t there as long as I was and was sent to another zoo.

As well as in the gift shops, I sometimes worked inside a lorikeet aviary called Rainbow Landings. There I was in charge of handing out nectar to people interested in feeding the birds. I really loved working in Rainbow Landings because I got to watch birds fly around all day.

I became friends with a few of the zookeepers and they invited me to feed one of the potoroos (a kangaroo-like marsupial) mealworms. I felt like I was on the inside, behind-the-scenes. It was a really cool experience.

Not all zoos are bad

As an animal rights activist, you’d think I wouldn’t be a fan of keeping animals in captivity. But modern (and good!) zoos, such as Edinburgh Zoo, are very important for animal conservation. Zoos allow scientists to research different species so they can learn how to restore and repair ecosystems, permitting future species to flourish in the wild.

Many zoos incorporate breeding programmes into their facilities, helping endangered species to thrive and grow in numbers while providing them with incredible care and protection that they wouldn’t get in the wild. Animal parks also act as a means of educating the public on the importance of taking care of these wonderful creatures and offer people a glimpse into the lives of animals they wouldn’t normally see.

Pros of working at Edinburgh Zoo

If I needed one day off, I’d let my manager know and she would make sure it was scheduled. It wasn’t even a problem if I needed several days off. This is something that you really shouldn’t take for granted because so many jobs have issues with members of staff taking time off for any reason.

At Edinburgh Zoo, I always felt so free. This is really great if you’re on a working holiday. It gives you plenty of opportunities to take time off and travel to other European countries or explore Scotland.

My co-workers were amazing, welcoming and hilarious

I always had a great time bantering with my co-workers. Although they did tease me about the way I say “bag”. This was something visitors brought up, too. We charged 5p for a carrier bag and I had to ask the customer if they wanted to buy one before bagging their purchases. I got so tired of my pronunciation confusing people that when I said the word “bag” I would pull out a bag and point at it so they knew I was saying bag!

Being surrounded by animals

Working in a zoo gave me the opportunity to spend my breaks walking around and seeing all sorts of animals! I really felt like I developed a bond with certain animals I visited regularly.

Working at an attraction in Scotland grants you special access to all other attractions within the country, thanks to the Association of Scottish Visitor Attractions. This was great for me since I love being a tourist and will visit any attraction I can!

Cons of working at Edinburgh Zoo

No matter how much you resist, it will eventually drive you insane when zoo visitors call the chimps “monkeys”. In case you don’t know the difference, monkeys have tails and chimps don’t. A small piece of each zoo employee dies a little bit every time you call a chimp a monkey.

Should you work at Edinburgh Zoo?

Whether you’re a temporary, foreign or local worker interested in a position at Edinburgh Zoo, go for it! There are so many more opportunities than just the gift shop. There’s the reception, food services, administration and education, to name a few.

I can’t recommend working at Edinburgh Zoo enough. It’s a fun place to work and it’s where I made lifelong friendships because the people are so nice, welcoming and fun. Plus you get to visit the zoo every day! Who else gets to visit penguins on their lunch break?

More Information about Moving to Scotland