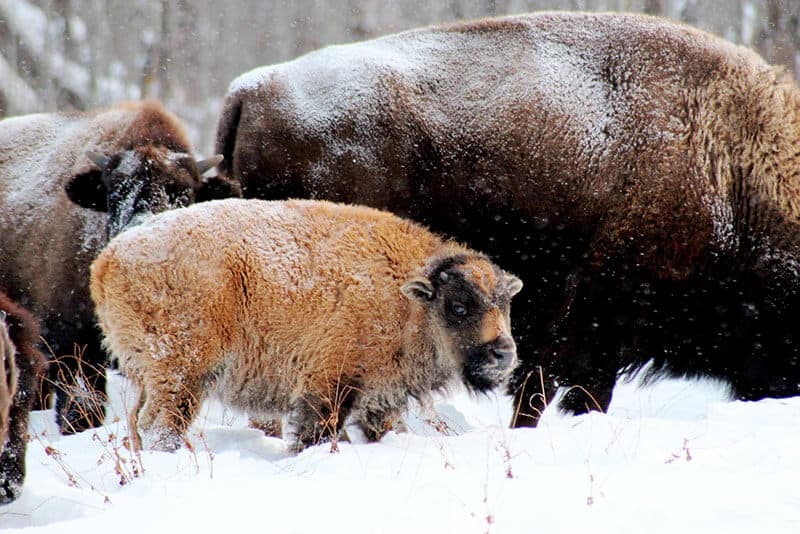 The highway to Elk Island National Park was a terrifying drive, largely due to the -26℃ winds that were hurling snow so thick I could barely see the road in front of me! Along Highway 16, I passed several cars and trucks that had managed to make their way into the ditch. I even saw one car that was flipped over onto its roof! However, this is what winter’s like in Alberta and the travel must go on. We were well on our way to discovering Elk Island National Park.

No Elk in Sight

I put on 2 pairs of socks, 2 pairs of pants and a few sweaters to protect myself from the horrendous weather. I was in an impenetrable bundle of clothes ready to battle the cold and fight any foe! Due to heavy snowfall the night before, Elk Island National Park was deserted – which led to an enjoyable experience of having the park to myself.

Before you ask, I didn’t see any elk…but I did see many bison. Despite its name, Elk Island National Park is renowned for its wide variety of bison. It is home to both Wood and Prairie Bison, which you can see on either side of the Yellowhead Highway (Highway 16). I decided to search for the Prairie Bison, as they’re easier to find because they prefer roaming open fields than lingering in the woods.

While I was driving through the piles of snow, I spotted a bison stood alone in a field…well, to be honest, I couldn’t quite tell if it was a bison or a rock. As I drove closer, I noticed it moving slightly…almost digging in the snow, It had to be a bison. The snow-covered everything – including the bison – so looks can be quite deceiving. I opened the window of my car and I yelled in his general direction and as he lifted his head to look at me. We looked at each other briefly before he went back down in search of more grass to eat under the snow. I felt a connection like we were truly friends at this point so I fondly named him Bob.

As previously mentioned, the night before my visit had Elk Island healthy dumping of fresh snow. Everything was covered in a thick layer of white. This allowed me to spot another majestic Canadian creature that only surfaces in the winter – the snowplow.

The snowplow driver was skilled at driving exceedingly fast! Luckily, I was on the other side of the road both times he passed me; so I didn’t have to worry about him plowing me down.

When he first passed me, he looked over with his cool shades and a handlebar moustache. I knew deep down that we were making eye contact, even though I couldn’t see his eyes.

I felt frightened — I knew he was the type of man who didn’t take crap from anyone and would be totally okay with pairing a denim jacket with denim jeans. He was bad-ass. But then again, all snowplow drivers are probably bad-asses.

After my eventful trip to Elk Island National Park, I would highly recommend you visit if you’re in the area. Not only is it beautiful, but it’s also full of bison! There’s no chance you’ll go to Elk Island and not see a bison; making it a guaranteed winner for animal lovers! You might also run into various birds, elk, beavers, moose, coyotes and deer.

For another experience in the area, check out the Beaver Hills Dark Sky Preserve, which I can only assume is full of beaver astrophysicists! Over Elk Island National Park, there’s minimal light pollution and the skies are very dark. This means you can see the wonders of the night sky a lot more clearly. I’ll make sure I bring my telescope when I visit this spring.

Elk Island National Park has an event between December 22nd to February 23rd called Snowshoe & Stargaze. This tour takes you on a guided hike with a park interpreter. You can find more information about it in my post about fun things to do in the winter in Edmonton!

Do you want to spend a day Discovering Elk Island National Park? It’s easy! It’s so close to the city but feels like you’ve stepped into a faraway wilderness retreat.

You can buy a day or two visits at the park entrance otherwise you can purchase an annual Parks Canada pass if you plan on visiting several national parks, national marine conservation areas or national historic sites in Canada.