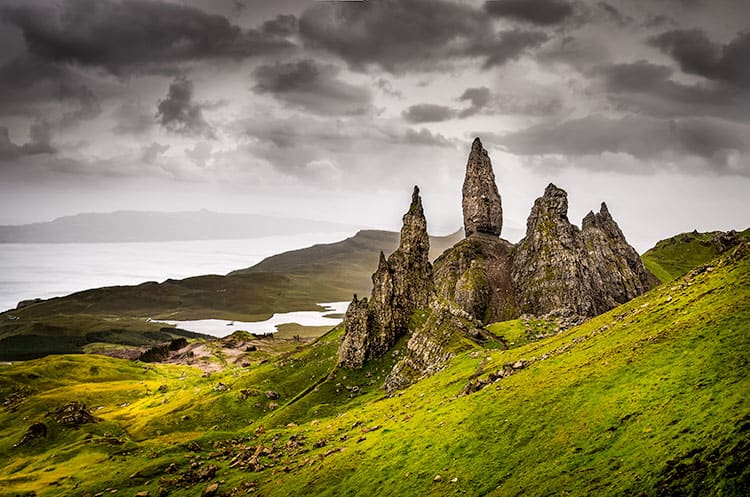 Get ready to be whisked away to the beautiful Scottish landscape and historical cities with these 13 books set in Scotland. From stories dating back to the Jacobite Rebellion. From stories of accused witches to stories of travelling throughout time in Scotland. These books about Scotland will transport you to the hauntingly beautiful hills and valleys of Scotland.

This Is Where I Am by Karen Campbell

This Is Where I Am follows the remarkable friendship of a Somali asylum seeker and a Glaswegian widow as they meet monthly in different locations around Glasgow, Scotland.

Abdi moves to Glasgow with his daughter Rebecca after fleeing a life of violence and torture. Abdi’s wife was killed along the way in Kenya. He meets his mentor Deborah at the Scottish Refugee Council in Glasgow. Their growing relationship shows the nitty-gritty of the losses faced in life and the flourishing friendship that connects them.

The story is told from the two main characters’ perspective and shows the harsh experiences they both endure heartbreaking realities. It takes you around various parts of Glasgow and a trip to Loch Lomond. You get to experience Scotland through the characters’ eyes.

If you are looking for books about Scotland, particularly Glasgow, this is a must-read. It captures the quality of Glasgow and the people of Glasgow.

Just be aware that Karen Campbell does not sugar coat the trauma and grief that both Abdi and Deborah face in the book. It talks about the grim truth that refugees face when trying to restart their lives in a new country.

Buy This Is Where I Am

The Turn of the Key by Ruth Ware

The Turn of the Key follows Rowan Caine as she moves to Heatherbrae House for a live-in nanny job in the stunning Scottish Highlands.

When Rowan arrives at Heatherbrae House, she is met with a seemingly haunted and creepy setting complete with eerie sounds, shadows and freaky-looking dolls. The children she is meant to take care of are so badly behaved that it’s no wonder the family has gone through four nannies in one year.

Unfortunately for Rowan, an amazing job opportunity turns into a nightmare. One of the children she is taking care of ends up dead. Follow along as Rowan’s life unfolds after she is sent to jail and tries to prove that not all is as it seems.

If you are looking for Novels set in Scotland, be sure to pick up The Turn of the Key. You will whisk your way into the Scottish Highlands, except hopefully with less terrifying twists.

Buy The Turn of the Key

The Blackhouse: The Lewis Trilogy by Peter May

The Blackhouse follows detective Fin Macleod as he heads back to the Isle of Lewis, where he was born and raised, to solve a gruesome murder.

The Outer Hebrides plays a huge part in The Blackhouse. You will really believe you are on the Isle of Lewis when Peter May sets the setting so descriptively. You will feel the rain and wind hitting you in the face as you turn each page

This is one of my favourite books set in Scotland. I found it hard to put down, and once I finished it, I was craving more and couldn’t start reading the next book in the trilogy faster.

Although Outlander is a series of books, I want to speak specifically about the first one. It is set in Scotland and follows Claire, who travels back 200 years to Scotland in 1743. Claire meets up with Jamie of the Clan Fraser. They start a torrid love affair while her husband was back in 1945.

Now, that isn’t the reason I loved Outlander. I loved it because it made me truly fall in love with Scotland and its people. In Outlander, the Jacobite Rebellion was in full swing, and it takes you along as the Clans fight in the Battle of Culloden.

The Unnatural Death of a Jacobite by Douglas Watt

If you are looking at reading some historical fiction set in Scotland, The Unnatural Death of a Jacobite by Douglas Watt is your book. The story takes place in 1689 when a body is discovered in the Craigleith Quarry in Edinburgh.

If you have read Watts’s other books, such as Death of a Chief or Testament of a Witch, you will be familiar with Advocates John MacKenzie and his assistant Davie Scougall. The mystery behind the body is tied to the Jacobite rebellion happening in the Scottish Highlands.

The Unnatural Death of a Jacobite is one of the best crime novels set in Edinburgh. It truly transports you back to 17th century Scotland when witch hunts and religious superstition and prejudice were ordinary.

Buy The Unnatural Death of a Jacobite

If you love dark history, I highly recommend reading Corrag by Susan Fletcher. The story, which is also known as The Highland Witch or Witch Light, takes place in 1692 during the Massacre of Glencoe.

The book follows Corrag, who was accused of witchcraft shortly after the Clan Campbell massacred Glen Macdonald. The Clan Macdonald was betrayed at 5 am after spending ten days hosting the Campbells. Corrag is imprisoned and awaiting her execution when Jacobite Charles Leslie is eager to spread the truth about what really happened in Glencoe.

Corrag is one of the best Scottish novels that take you back to one of the most brutal and real-life massacres in Scotland. If you love witch history in Scotland, Corrag this is another great book. It dives deep into the reality of accused witches in Scotland.

When reading about books set in Scotland, you won’t want to miss out on the Scottish Highlands. Set in the small Highland town, Whirligig is a Scottish crime novel that follows James Corstorphine. James is still grieving the loss of his wife as he and his group of officers try to solve a twisted murder mystery.

One of the best things about Andrew James Creig is how fluid his writing is. Each chapter will leave you wanting more. It is a hard book to put down, making it one of the Best Scottish novels you can read.

If you want a compelling thriller filled to the brim with an intense dark storyline, you will love Whirligig.

Edinburgh is full of incredibly beautiful historic graveyards and cemeteries. Greyfriars Kirkyard is undoubtedly one of Edinburgh’s most popular graveyards. From stories of a loyal dog to inspiration for Harry Potter characters to the haunted Covenanters Prison – the graveyard has so much history.

As you walk through the monuments, many original inscriptions and symbols are illegible or so weathered away after sitting through the Scottish weather for 300 or more years. It can be hard to find information about certain ornate graves and the history behind the people to who they belong to.

In an attempt to find out the history of one of the massive historic graves, I stumbled upon Charlottes’ book Greyfriars Graveyard.

It is one of the best Scottish history books for those of us who love exploring the historic graveyards in Edinburgh.

Shuggie Bain is a heartbreaking and depressing story of a young boy, Shuggie, and his life growing up poor in 19080s Glasgow, Scotland. The story follows Shuggie as he struggles to care for his alcoholic mother while trying his best to live a normal life.

Shuggie Bain is a tale of substance and emotional abuse, yet no one is truly the enemy. You feel compassion for Shuggie’s mother even though she is failing her son – she is a victim of her times.

I recommend reading Shuggie Bain if you want a taste of the sad reality of some families in Glasgow who fell between the cracks in a poverty-stricken era.

Trainspotting is one of the most popular cult classic books set in Edinburgh. It follows a group of drug addicts who are trying to get through life in Scotland. The book is told from Mark Renton’s perspective, but you hear from different people and their perspectives throughout the book. It feels like it is like a collection of short stories in a sense.

It talks a lot about drug addiction and trying to make your way through life, getting clean, relapsing and everything in between. The characters are really selfish in their pursuit of drugs and their lifestyle. It’s gritty and shocking, but it is a good read to get a sense of life is when drugs become your whole world.

Trainspotting is filled with dark humour and is so well written. Irvine Welsh really knows how to transport you into a world of drug addiction and how it affects everything in your life.

The book is written with Scottish colloquialisms and Scottish dialect. But the longer you read, the easier it is to understand. If you are still having trouble, try reading it out loud – you will understand it better!

Women of the Dunes by Sarah Maine

Women of the Dunes is one of the best novels set in Scotland. The book transforms you into three different time periods by characters connected by family, love and betrayal.

The follows three women, Ulla, a Norsewoman who escapes her husband and sails to Scotland in the 9th century. The story continues through Ellen from the 1800s, and her obsession with Ulla’s story to the present-day Libby heads to the west coast of Scotland to dig up her family’s secrets.

Woman of the Dunes is phenomenally well written and well researched. Sarah Maine does an amazing job of intertwining the lives of characters you will love and the mysteries of the past.

Buy Women of the Dunes

Poor Things follows the life of a lonely doctor who tries to create the perfect companion by reanimating the body of a beautiful woman who passed away by suicide. The book, which takes place in Glasgow, echoes Mary Shelley’s Frankenstein.

Poor Things is one of the best Scottish books full of humour as it explores the life of the reanimated “monster” Bella and her new life. Bella reminded me of Sally from Tim Burtons The Nightmare Before Christmas. Her story really reverberates the idea that a life without freedom is not worth living.

This book is currently in the works of being turned into a film starring Emma Stone as Bella, so that is cool!

The Wages of Sin by Kaite Welsh

If you love strong female characters who go against society’s beliefs of what women should be, you will love The Wages of Sin by Kaite Welsh.

The story follows Sarah, a woman from London who heads to Edinburgh. She is planning to attend the medical school at the University of Edinburgh. Sarah struggles to get a proper education in a male-dominated field. She is also trying to solve the murder of one of the cadavers that land on the table in her anatomy school.

This is one of my favourite books set in Scotland that dives deep into the world of feminism and murder in the late 1800s Scotland.

Buy The Wages of Sin

Want to save this post for later? Use the pins below!