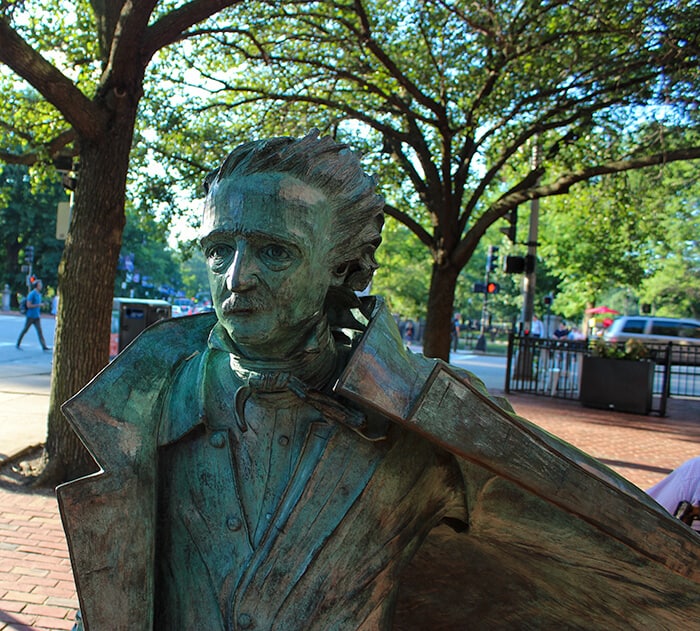 Boston is home to boundless intriguing history, from being the birthplace of the macabre mystery writer Edgar Allan Poe to being a city where so many political events took place that shaped the way America runs today. Because of its fascinating past, there are many interesting archival places to visit, including colonial cemeteries, such as the Central Burying Ground and the graveyards which line the Freedom Trail. If you’re a fan of dark history, Boston is the place for you.

When I was in Boston, I decided to find the birthplace of Edgar Allan Poe. I knew it was close to his statue and marked by a plaque. Although the original building he was born in (62 Charles Street) no longer stands — it was replaced by a super cool parking lot — I still wanted to see the plaque and stand as close as I could to the birthplace of one of America’s greatest authors.

During my walk towards the memorial plaque at Edgar Allan Poe Square, I came upon a crossroads with no mention of Poe at all. Google Maps wasn’t much help and I was left looking around, trying to figure out where exactly I was.

As a lover of dark tales and spooky stories, I’ve always been a fan of Edgar Allan Poe. Well, less of a fan of his actual work and more of a fan of his stories told by my childhood-favourite TV show, The Simpsons. His poem “The Raven” was featured in season three’s “Treehouse of Horror” episode, which stuck with me from an early age. But my favourite Simpsons’  Poe collection is from an episode in season six called “Lisa’s Rival”, featuring a diorama of “The Tell-Tale Heart”. The episode focuses on Lisa as she’s affected by the “beating of the hideous heart!”

I also read one of Poe’s short stories in high school and absolutely loved it. It was called “The Premature Burial” and told the tale of a man who believed he’d been buried alive. At the time Poe wrote the piece, being buried alive was a genuine concern among the general public. Have you ever wondered why old grave sites have a bell above the ground? It’s so if the person buried below was still alive, they could ring it and be saved. The short story is fantastic. I loved reading it and I recommend it highly.

I’m not really sure if I ever made it to Poe’s birthplace. It was hot and I was tired due to spending a day networking at a conference. So rather than wasting time and energy looking around more, I decided to just head towards the life-sized statue of Edgar Allan Poe instead.

As I approached the bronze statue of Edgar Allan Poe, located across the street from the Boston Common and Central Burying Grounds, I was amazed by how small the statue really was. Was he really so tiny? The statue shows the author rushing through the streets of Boston, his hair blown back and his coat flowing open on one side. His briefcase is slightly unfastened, with his famous Tell-Tale Heart sitting among his papers while a large regal raven flies right in front. It’s a perfect representation of Poe.

What I took from the statue is probably different from that which most fans take. It made me think, “So if I travelled back in time would I be a giant? Would people know I’m from the future because I towered over them all?” It’s thoughts like this that keep me awake at night.

Boston has many fantastic free and low-cost sites to visit, such as Edgar Allen Poe’s statue and the graveyards in Boston Common and the Freedom Trail.

Despite Poe’s statue being in a fairly busy area, he looked quite lonely with only me keeping him company. After I took some photos, I headed across the street into the park to explore some more.

Boston Common is America’s oldest public park, once owned by Puritan colonists and now home to the Freedom Trail. On my way there, I passed a group of men playing baseball and a cart full of t-shirts with typical Bostonian phrases, like “Wicked Smaht” and “Wicked Pissah”. Sadly, I didn’t hear a single person say “wicked” during my entire Boston trip.

I continued walking up the path towards an open green field and I stumbled upon one of Boston’s oldest cemeteries – The Central Burying Ground. It was the fourth cemetery built in Boston to deal with the overcrowding of the first three, which can be found by walking the Freedom Trail. Even though it’s incredibly beautiful, the Central Burying Ground is the least visited of the four, as it is farthest from the center of town.

The most notable person buried in the Central Burying Ground is Gilbert Stuart, who’s buried in tomb 61 along the fence. He’s most famous for his painting of George Washington which appears on the American $1 bill. Did you know the painting was actually unfinished and only showed a headshot of Washington? Gilbert also painted a life-size portrait of Washington standing in the office during his final year as president in 1796. You can see the original at the Smithsonian’s National Portrait Gallery in Washington DC.

In the 1890s, when the Tremont Street Subway was being built, a mass grave site underneath was discovered, filled with the bodies of over 900 British soldiers who died during the Battle of Bunker Hill. Several claimed bodies were moved and a plaque was put up, marking those who now lie in a different part of the cemetery.

As Boston is such an old city and the Central Burying Ground has so much history, there are a few ghost stories about the graveyard and paranormal sightings have been reported. The cemetery is home to several unmarked graves of children who perished from disease and impoverished citizens, which can instill feelings of sorrow.

People believe the displacement of so many graves is what led to the ghostly sightings. Stories abound of a young girl in white roaming the grounds, following people as they walk along the trail and occasionally touching them with her cold hands. Who knows, with so much disruption of burial sites, there may be many trapped spirits still lingering there.

If you want to hear more about the Central Burying Ground and other historic and haunted cemeteries around Boston, be sure to take a tour with Ghosts & Gravestones which you can book here.

My favourite part of visiting the Central Burying Ground was the abundance of wildlife living within the trees surrounding the headstones. The closer I got to the fence, the more excited all the squirrels were. I had several plump little ones come as close to me as they could, hoping I had food to share. I revelled in my squirrel popularity and snapped as many photos as I could.

If you’re planning to visit the Edgar Allan Poe statue, be sure to pop across the street and give this less-popular cemetery some love. It’s a beautiful sombre cemetery where the air is thick with memories of sorrow drifting between the trees and graves. As always, be respectful as you walk among the headstones, so history can be preserved for all to enjoy.

More information about Things to do in Massachusetts