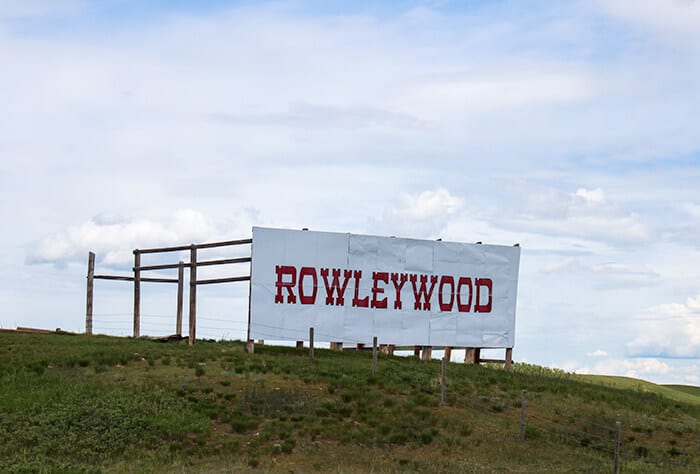 A ghost town filled with secrets, creepy mannequins, cats and buildings straight out of the wild west…the tiny hamlet of Rowley, Alberta has it all! More than your average ghost town, Rowley has its fair share of abandoned buildings and deserted railway cars. But the townsfolk, a meager population of eight, have transformed the place into a fascinating heritage site for tourists.

In the 1920s, Rowley was a bustling Southern Alberta prairie town, with over 500 flourishing residents. But due to the devastating blow of the Great Depression, most residents abandoned the town and the once-thriving crops dried up due to lack of rain, leaving the place desolate and empty of any life.

Buildings in small towns like these were often destroyed by fires. And instead of rebuilding and restoring the town, people would simply cut their losses and move away. This scenario was very common for the prairie provinces of Alberta and as a result, you can find several ghost towns throughout Alberta and Saskatchewan that met a similar fate.

In the 1980s the last remaining residents of Rowley decided to revive the town and bring it back to life. Instead of letting the old abandoned buildings and the history they contained rot, crumble and die, the residents turned the town into a historical wonderland.

Some of the buildings on Main Street were transformed to look like a scene straight out of the wild west. They also constructed several buildings for various movies, including Legends of the Fall and Bye Bye Blues.

To maintain the town’s upkeep, Rowley now offers free tours in summer and monthly pizza parties on the last Saturday of every month. This gives visitors the chance to peek inside the old buildings that sit on Main Street in the tiny hamlet while contributing to the preservation of Rowley.

Visiting a Ghost Town in Alberta

Before Rowley, I’d only ever been to one ghost town, just off the highway in rural Saskatchewan. When I was there, walking through the silent streets, I had the distinct feeling I wasn’t alone. I felt like I was being watched in a sinister way. I was never totally sure if there was someone around, a feeling which created a pit of nervousness in my stomach. Plus, both times when I tried to leave, my car had trouble starting, which turned my mild uneasiness into pure panic.

Thankfully, Rowley didn’t make me feel this way at all. I felt happy the entire time I spent in the little ghost town! Sure, some of the buildings had been abandoned, but the atmosphere was happy and the place filled me with delight. Plus, I already knew there were a few people living in Rowley, so I was never truly alone.

As I approached the turnoff from Highway 56, leading to the dinosaur town of Drumheller, I saw a giant white sign perched high on top of the hill.

“ROWLEYWOOD” was written in giant red letters across the white sign.

It was at this point I knew I’d discovered the coolest ghost town ever.

When I saw the sign, Rowley was still a 5km ride down a gravel road, a journey I took quite slowly because I hate driving down gravel roads. It was definitely worth the trip, though! As I got closer and closer to the buildings on the left side of the gravel, there were road signs saying “ROWLEY” with giant arrows pointing toward the tiny cluster of aged buildings.

I made a left and slowly drove onto Main Street, where I was welcomed by well-manicured lawns and buildings that made me feel like I’d just stumbled onto the set of a wild west movie. I parked my car and excitedly jumped out into the intense summer heat to get a closer look at all the age-old buildings.

My first stop was the Rowley Trading Post, built in the 1920s. In its prime, the trading post was where Rowley residents would purchase their dry goods and groceries. By 1973, it was the last business to close in the town, apart from the grain elevators.

Other former businesses within the hamlet include a printing press, school and a Saloon dedicated to the memory of a previous owner, with real-life swinging saloon doors that totally won my heart over forever.

Another really cool building on Main Street was a bank built in the 1980s as a set for the film Bye Bye Blues. I took a peek inside and was welcomed by a bunch of paraphernalia from the movie, as well as other historical artifacts.

One building I came across that confused me was the funeral home…because it had a side gig as a pool hall and proudly exclaimed, “Drink Pepsi!” on its doors. I thought that was weird. Essentially, drink Pepsi and die? But I later found out the strange double persona was because the front of the building was used in a movie! I’m not sure if it was also Bye Bye Blues or another film. Either way, after production, the Rowley residents decided to turn the place into a pool hall for everyone to enjoy.

As it turns out, several buildings and storefronts were built specifically for movies, with Bye Bye Blues being the biggest reason behind all the cool structures.

My favourite building was a massive house with broken windows boarded up from the inside by wooden planks. It was beautiful in its abandoned state, still preserving its former beauty, but aged and weathered by time. This house was once used as an old hospital in 1910 when the community of Rowley was just being established.

Leaving the old hospital, I walked toward the train tracks and noticed giant grain elevators towering above, giving the place the quintessential Alberta feel. As it’s one of Canada’s prairie provinces, grain elevators are a huge part of Rowley’s history, used by farmers to load grain onto the trains to be sent away and sold. Also lining the tracks was a historical train station, which was where things got weird.

As I approached the train station, snapping pictures like crazy, something in the window caught my eye. I did a double-take as I noticed a ghostly white face with dead eyes staring straight ahead. It was a lifeless man, dressed in period clothing as an old-timey train station conductor. Little did I know he wasn’t the only one living in a perpetual scene from the life of a 1920s Rowley resident.

I peered through a handful of windows before arriving at the train station and this was the first time I’d seen a mannequin staring back at me. Apparently, Rowley is crawling with creepy stark white mannequins living out their former glory days in various buildings around town.

Where were the rest of the mannequins? Were they watching me as I walked by Main Street, witnessing my excitement of being in the coolest ghost town I’d ever visited? I’ll never know for sure.

Getting a Tour of the Rowley Ghost Town

During July and August, you can take a free tour of the town, venturing inside the historic buildings and learning all about their pasts. Plus, you’ll get to see several displays of mannequins living it up in scenes straight out of the 1920s.

If you can’t make it to Rowley during summer, the hamlet also hosts monthly pizza parties to help fund the restoration and conservation of all of the buildings that make it such a special place.

Rowley is occupied by just 8 or 9 resident humans and several feral cats. During my visit, I met one human and two cats — all of whom were super friendly and filled my heart with joy. Okay, just the cats filled my heart with joy. But the older man I met was incredibly welcoming and stopped to talk to me, telling me a bit about one of the buildings he was using as a storage closet for his home. I do wish I’d been able to meet more of the people living in Rowley. But next time, when I go back for a tour to see all the creepy mannequins, I hope to bump into more Rowley cats and humans.

How to Visit Rowley Alberta

Although Rowley is more of a heritage site than a traditional ghost town, it’s an incredible place that’s definitely worth a visit. Be sure to say hello to one of the cats that call Rowley home or strike up a conversation with a local.

Check out one of the monthly pizza parties, go for a weekend camping trip (bring a donation) or rent out their community hall for an event. It’s important to keep the heritage site and historic ghost town alive so everyone can enjoy it.

Be sure to visit their FaceBook page to find out more about their monthly Pizza Parties and free camping information.

Rowley is located north of the Red Deer River Valley, 5km off Highway 56, 38km north of Drumheller. Look for the large grain elevators and numerous signs pointing the way to the town, which will be on the left side of the rural gravel road.

Ghost Towns fall under the realm of Dark Tourism and depending on how old, decrepit and abandoned the ghost towns are they may be incredibly creepy. If you love visiting about dark tourist sites or spooky travels be sure to check out the posts about other places touched by dark tourism or are generally spooky to feed your ghostly interests.

Posts about Weird and Unusual Things in Canada