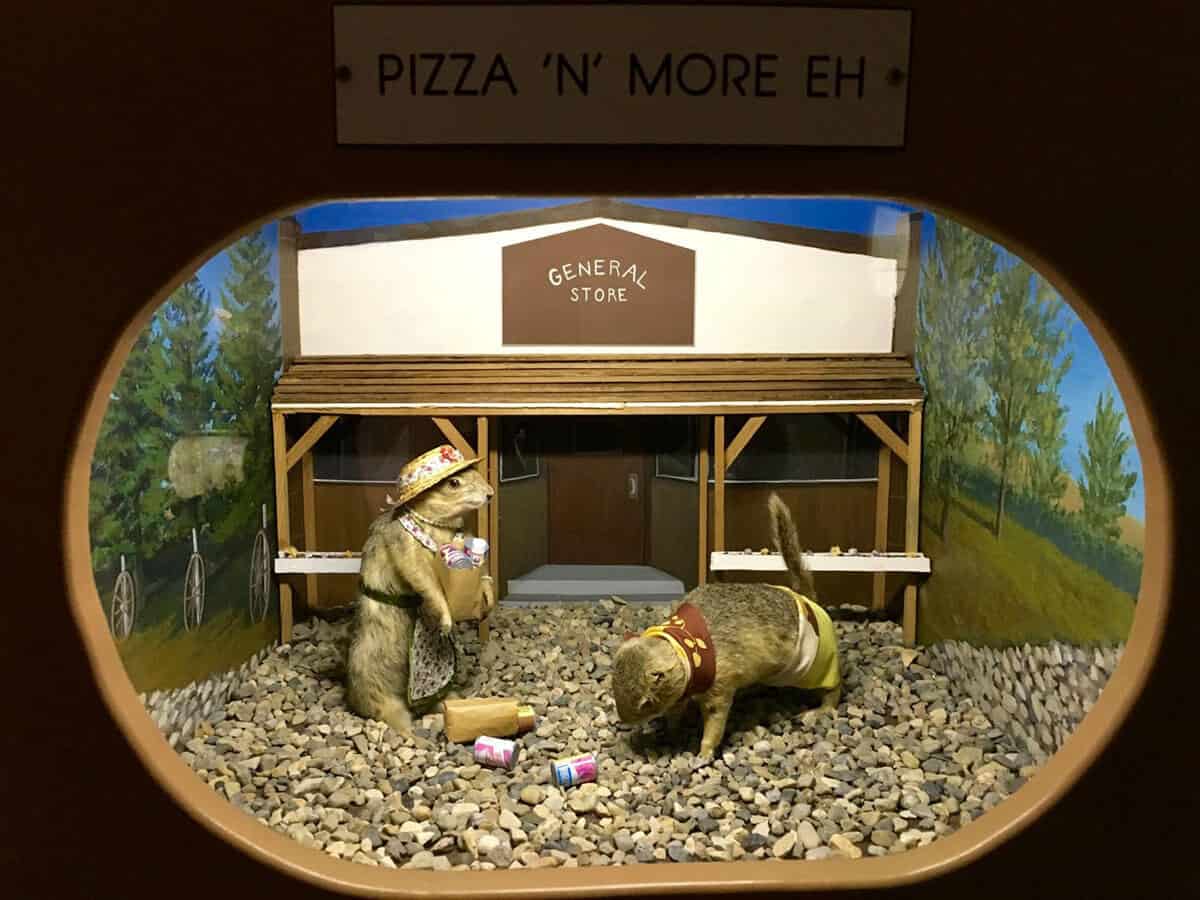 Alberta is a Canadian western prairie province that offers a range of stunning scenery, landscapes, and sights for the tourist to explore. From spending a day taking in the majestic Rocky Mountains to exploring the Badlands, seeing the Northern Lights and exploring one of Alberta’s many picturesque towns – there’s so much to do!

Filled with the history of the wild west, Alberta is a province that I would recommend to tourists of all ages and interests. So, without further ado, here are my top seven unique sites to visit in Alberta!

Visiting the Gopher Hole Museum is an absolute must for anyone interested in learning more about Alberta’s quirky past! The museum is located in Torrington and features a number of taxidermy “gophers” (actually Richardson’s ground squirrel’s!) in diorama-style displays. Each diorama offers a glimpse into the social history of the tiny hamlet of Torrington, and the exhibits include a scene from a beauty salon, a fashion show, the bank, a fishing hole and a parade!

Fuch’s Wildlife Exhibit is a permanent fixture at the Cultural and Science Centre, and the exhibit has amassed over 1200 pieces of taxidermy from all over the world. Each specimen has been stuffed and mounted by Nicholas Fuch himself, making his collection the largest one-man taxidermy collection in North America! It features a number of different animals at different stages of processing (definitely one for the kids!)

Museum of Fear and Wonder

The Museum of Fear and Wonder is located in Southern, Alberta about an hour and a half from Calgary by car. The museum features a collection of waxworks, terrifying dolls and toys from the past. These objects are meant to provoke feelings of fear. If you want to visit, make sure that you plan your trip during the summer months; the museum is only open in June through August and you have to make an appointment in advance.

Nestled in between the hoodoos of the badlands in Drumheller, the Royal Tyrrell Museum is home to the world’s largest collection of dinosaur fossils. Each fossil has been assembled and displayed for full effect, and you can look straight into the eyes of some of the most awe-inspiring dinosaurs to ever roam our planet!

The mystical creature is half man and half beast and actually looks like a bad taxidermy job – (seems to be a theme in Alberta!) – of the top half of a monkey species and the bottom half of a mackerel.

This merman was made public in 1915 by Banff pioneer Norman Luxton. Where the merman really came from is still a mystery!

Alberta is home to many giant roadside attractions, but my personal favourites are the giant pieces of food! Just a few hours from each other are the giant sausage (known as a kubasa or kielbasa) in Mundare, the giant Easter egg (known as a pysanka) in Vegreville and the giant perogy in Glendon.

For the TV and sci-fi geeks, the Star Trek-themed town of Vulcan located in southern Alberta has embraced all things Trekkie! You can immerse yourself in the world of Star Trek by viewing the replica Enterprise ship, the copper bust of Spock with an imprint of Leonard Nimoy’s hand, and an information centre shaped like a spaceship that displays a multitude of Star Trek memorabilia!

Alberta is a fantastic feast for the eyes and the soul! The varied landscapes are truly stunning, and the quirky little towns throughout the province blow me away! Take a visit for yourself and explore everything that Alberta has to offer!