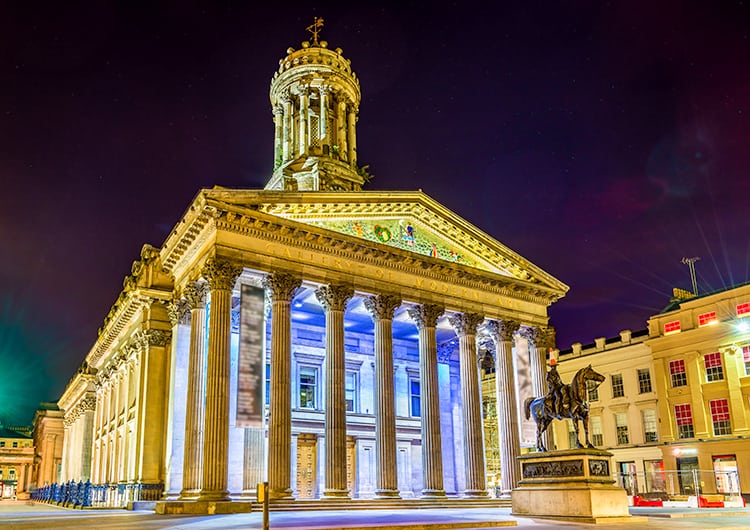 Scotland is known for being spooky, haunted and full of a dark history. Glasgow is no exception, although not as haunted as Edinburgh, there are plenty of haunted places in Glasgow.

From the ghosts that linger in old theatres to spooky tales of child-eating vampires with razor-sharp teeth. Glasgow is full of terrifying legends, mysteries and places perfect for the dark traveller.

If you love ghost stories and history, spend a day exploring the historic sites and haunted places in Glasgow. You can even go on a Haunted City Exploration Game and Tour in Glasgow if that is your thing!

Known as being the city of the dead, the Glasgow Necropolis is a haven for lovers of historic Victorian cemeteries. While the cemetery offers an abundance of history, there are some haunted stories tied to a few of the tombstones.

The Glasgow Necropolis is home to a woman in white. A ghostly figure that floats through the cemetery’s tombstones in the wee hours of the morning. Many people have claimed to hear faint disembodied whispers as they roam through the necropolis alone.

In addition to the ghostly figures that call the Glasgow Necropolis home, the terrifying legend of the Gorbals Vampire casts a dark shadow over the cemetery. This horrifying vampire is said to be 7 feet tall with a set of iron teeth that it uses to tear children apart.

The legend says that a group of young children came to the necropolis, weapons in hand, ready to battle the vampire. The kids never found the Gorbals Vampire (luckily!) and the legend has faded away over the years.

Built-in the 15th Century, Provan Hall House is one of Glasgow’s oldest buildings. The National Trust building sits in Glasgow’s Auchinlea Park in Easterhouse and has many paranormal ties.

Possibly due to its age or history, Provan Hall House has several ghost sightings such as the woman who haunts the upper floor of the building. Staff have said they often see her spirit looking out at them out of the windows of the dining hall.

A second ghost is an angry spirit that is seen holding a dagger. The story behind his presence is that he was a young man who murdered his wife and children in a fit of rage. If you see him be wary as he is still very angry as he continues haunting the grounds.

Still currently an active hospital, the Glasgow Royal Infirmary has been operating since the late 1700’s. Several apparitions have been spotted roaming the infirmary halls.

One of the most frequently observed ghosts is that of a hospital staff member who appears normal until you notice that she has no legs.

A spirit known as the Gray Lady is also known to linger around the infirmary. She has been seen by hospital workers walking through the halls dressed in a gray dressing gown.

If someone goes after her to see if she is alright she will disappear into nearby rooms and vanish into thin air.

If you would like to spend the night with ghosts you need to book a night’s stay at the Cathedral House Hotel. Located directly across the street from the Glasgow Necropolis, the hotel is said to be the most haunted in Glasgow.

Known for being one of the most haunted places in Glasgow, the Cathedral House Hotel has ties with a former prison. The Duke Street Prison, a harsh place known for mistreating its prisoners with poor living conditions.

The prison was demolished but left one wall that sits close to the hotel. Rumour has it that the ghosts from the prison are haunting the rooms of the hotel.

The voices of children laughing are often heard in the halls and rooms on the higher floors of the hotel.

Another ghostly presence is felt when you walk up the staircase from the hotel lobby to the rooms. Often you will feel someone brush past you or touch you as you walk through the narrow stairwell.

The historic theatre opened in 1867 as an Opera house. The theatre changed hands, had fires and was refurbished throughout the years.

Similar to other haunted theatre stories, the ghost who haunts the Theatre Royal Glasgow is that of a failed actress. Legend says that a cleaning lady named Nora attempted stardom in the theatre.

She was laughed off of the stage and killed herself due to shame. Her spirit hangs out in the upper circle.

Nora bangs moans and wails to make people aware of her presence as they enter the theatre.

The Tron Theatre was originally the site of St. Mary’s Church which burned down in a city-wide fire in 1793. Luckily, the steeple survived still sits on the theatre today.

The staff of the Tron Theatre in Glasgow claim that the building is one of the most haunted places in Glasgow with frequent ghostly sightings. Often times, staff and patrons get an uneasy feeling of being watched, being touched or witnessing doors open on their own.

Other ghosts have been spotted on the former site of St. Mary’s Crypt – perhaps they are lost and are looking for their final resting place?

One of the coolest things about Scotland is how many pubs are located in former sites overflowing with history. Similar to the haunted Banshee Labyrinth pub located in Edinburgh’s haunted vaults, the Argyle Street Arches have a comparable history.

The Argyle Street Arches offer exposed brick vaulted ceilings which is the perfect atmospheric setting for a night out. The nightclub is located beneath the Glasgow Central train station and has its fair share of spooky tales.

The most well-known is of a little girl spirit who appears to be lost. When approached she screams and disappears into thin air.

The spooky Victorian school turned museum was built in the early 1900s. The Scotland Street School Museum was once used as a school for children whose families were shipbuilders and engineers.

The museum boasts three classrooms that offer you an idea of how the school appeared during Victorian times. I am unsure of what could have caused the ghostly activity but the building is extremely haunted.

Staff members who work at the museum say that they see dark shadows, disembodied voices, footsteps and have witnessed items move on their own. Creepy!

The story of the ghost that haunts Dalmarnock Bridge in Glasgow is a sad one. The 200-year-old bridge is said to be haunted by the ghost of a young man who jumped off of the bridge ending his life in the 1930s.

No one is sure who this man was, but many people have witnessed a man dressed in black jumping off of the bridge and vanishing before hitting the water.

How sad is it that he continues to relive his death over and over again?

The historic hotel was once a part of the British railway and is haunted by the former guests of the hotel during the 1940s. The hotel has been abandoned and refurbished over the years, but the ghostly activity remains the same.

Some say that the land that the Grand Central Hotel sits on was the former location of the forgotten village of Grahamston – perhaps the paranormal activity is tied to the residents who once called the land home.

More Information about Spooky & Haunted Things to do in Scotland