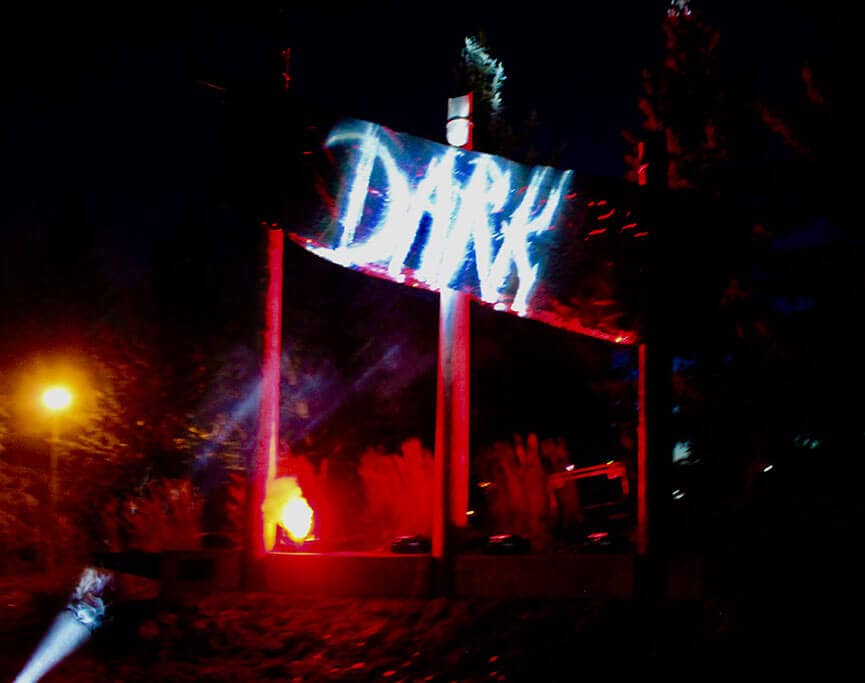 Darkness comes to Fort Edmonton Park and I am ready to find out if I can finally be scared!

Usually, I’m one of those people who are impossible to scare. But one of these days, I think I’ll be surprised and really have a fright-filled (but safe!) night in a spooky haunted house.

Fort Edmonton Park is normally a living museum made up of buildings, shops and houses from the 1846 Hudson’s Bay Fort and local streets from 1885, 1905 and 1920. As you walk through each time period, you’re met with character actors who treat you as a fellow local from that time period. You become engrossed and captivated by Edmonton’s history happening before your very eyes.

But during Halloween season, Fort Edmonton Park gets seriously spooky. Three separate haunts were set up and they only let a few people inside at once. This was both good and bad. Good because it’s a much better experience when you’re not in a crowd. But bad because it means you’ve got to wait a long time in line — usually anywhere between 30 and 75 minutes.

This year Fort Edmonton Park took their haunted houses in a totally new direction. Normally, the park is completely accessible and you can explore freely. You’re able to walk through the forests, the various paths and step into a few buildings… expecting a fresh horror scene in each one!

But for 2018, Fort Edmonton Park decided to segregate the horror into three separate “haunts”, each with its own independent storyline.

I managed to convince my best friend Christina to attend this year’s Fort Edmonton Park haunted event, aptly named “Dark”. Christina hates these kinds of events and spends weeks dreading what’s to come. She fills her mind with the worst possible scenarios until she’s brimming with so much anxiety she could vomit. At Dark, she decided to get the worst haunt over with first.

A tale about werewolves taking over the Edmonton River Valley was the most popular (and possibly scariest!) haunt in the park. Standing in line, we could hear howling wolves mixed in with the screams of people being spooked. The wait time in the line for this haunt was long and an hour later we were finally able to enter.

Christina and I carefully ventured along the dark path right next to the dark river valley.

We were approached by a large man telling us the wolves would get us if we weren’t careful!

As soon as he warned us, we could see outlines of werewolves in the path ahead and we completely froze. That’s when the werewolves made their move and headed straight for us! The group of three people in front of us screamed as they were completely startled by the werewolves’ unnerving movements, unsure where they’d go or what they’d do!

As we passed the threatening werewolves, we continued down the path. Just Christina and I, alone in the dark with these beasts! They were all over the place. Some were ordinary werewolves and some were half-wolf half-human as they were transitioning, yelping as though the force taking over their body was the worst pain they’d ever experienced. We turned the corner of the dark path and saw an arrow pointing to the entrance of a glowing house.

As we entered the house, we were the only humans left. The entire place was filled with wolves, including one tied to a wooden plank. I wasn’t sure if it was stuffed or a real person…until it let out the most hilarious growl which forced me and Christina burst into uncontrollable laughter. It was then that Christina’s fear completely vanished and she realized she was having a really great time.

We exited the building into an area with four werewolves just eyeing us up. This is where Fort Edmonton Park went right! We were met by a girl who seemed like a regular visitor. We were chatting a bit about the haunt with her and she mentioned the Dead Wedding haunt and her experience with the jump scares. At least we thought she was a regular visitor, having a regular conversation with us…until she was mauled by one of the werewolves!

This part of the haunt was awesome and a great character choice. I applaud Fort Edmonton Park because I didn’t see that coming! The experience wasn’t scary though, as there’s a rule that the actors will never touch the visitors. Since the werewolves were all over her, I immediately knew she was another actor. But I still enjoyed the effect it had!

Our next stop was the Dead Wedding haunt which was a tragically sad story. There were quite a few jump scares — and all in the right places. The haunt began with a walk through a dark room filled with several brides covered head-to-toe in black veils. They wailed out uncontrollably and startled us with their movements. It was great!

Christina and I left the sad, weeping brides and ventured towards a dark church. Some of the people sitting in the pews were fake and others were real. But in the dark, it was hard to tell them apart as they all sat completely still! As we walked between the pews, a church patron suddenly stood up and screamed at us and others almost charged at us.

I’m not sure what exactly happened at the wedding, but several actors were dressed as the same woman. We first saw an old woman as she popped over the other side of the fence next to Firkins House wielding a knife while screaming “this is all your fault!” This woman was the first of many old knife-wielding women who appeared throughout the rest of the haunt.

She showed up several more times which made me laugh. I said to a few of them “Hold on, I just saw you back there!” and the woman (played by several different actors) would scream at us in her cackling old woman voice. She (all of them) were definitely my favourite character in all the storylines. I really enjoyed the wedding haunt the best.

The third and final haunt was the Taste of Eternity — a cult led by several people in beige cloaks. It started out friendly enough, welcoming even, but quickly turned into a terrifying experience. There were two entrances into the cult — one for men and one for women. So, if you were with someone of the opposite gender, you were going in alone!

The cult quickly turned into a horrible place filled with cannibalism and torture. To be honest, I did get successfully startled at the very end of the experience. I can usually tell when something is coming, but as we exited through a heavy metal door, I didn’t expect what was in store for me at the other side!

I slowly opened the door, expecting something, but as I peered around…there was no one there. I let out a relieved “Oh,” when suddenly a woman came at me from behind the door with a chainsaw. I was legitimately shocked and felt my heart beating fast. She was good!

Should you visit Dark at Fort Edmonton Park?

The event was a blast. Christina and I laughed harder than we had in months. Although the waiting times to get into each haunt was long, it was worth it in the end. I don’t know what they have planned for next year. But if you’re in the Edmonton area around Halloween, I highly recommend checking it out.

Tickets to Dark are only $30 and they give you access to all three haunts, as well as access to the DARK Circle – an area with food and beverages, as well as fires to warm up.

Getting to Fort Edmonton Park

Fort Edmonton Park is located just off the White Mud at 7000, 143 Street in Edmonton.