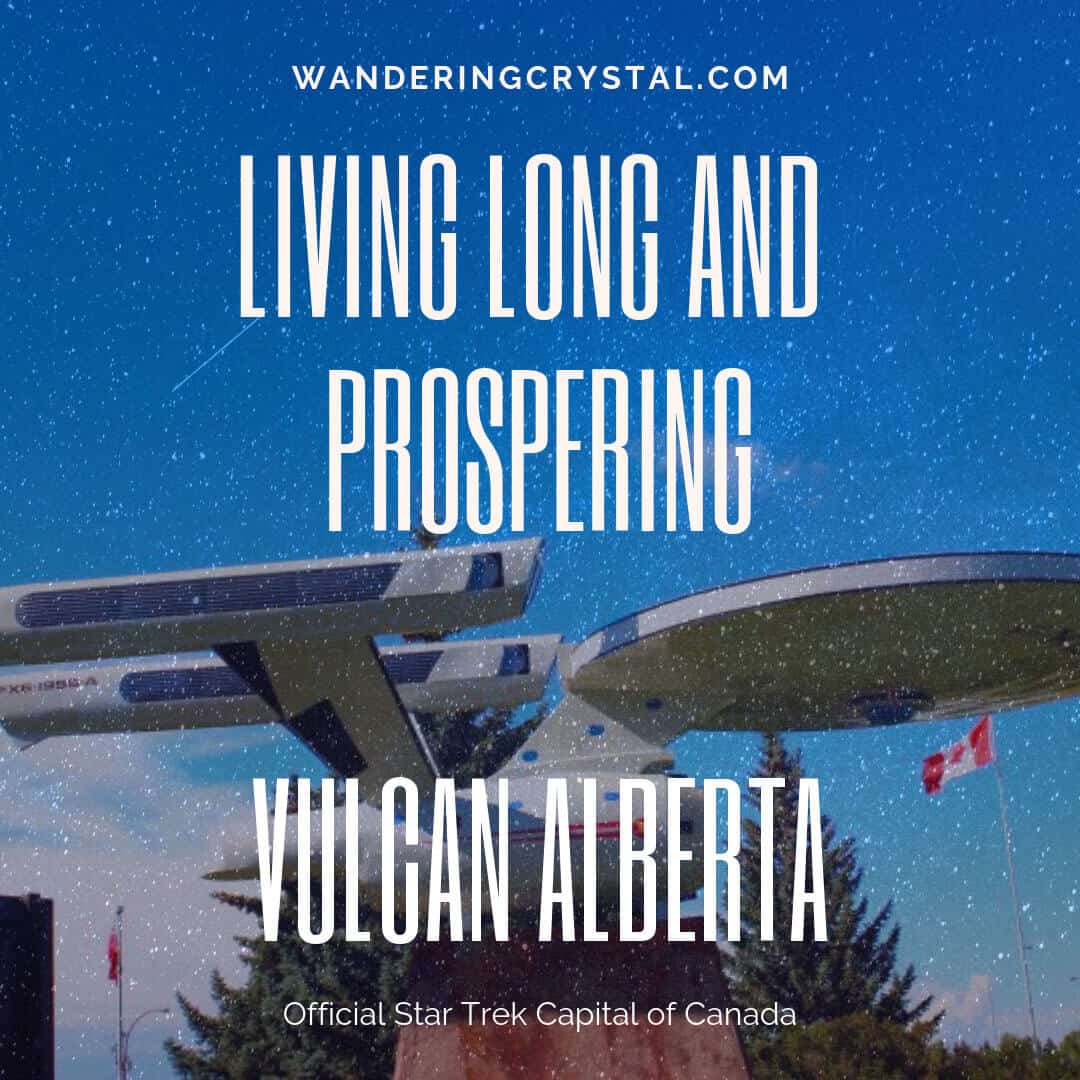 The sun beamed down onto our car as we drove into town. Christina and I could feel a tangible spark of energy buzz through the air! My eyes were immediately drawn to Vulcan’s giant roadside attraction – a replica of the Star Trek starship USS Enterprise. We were ready to Live Long and Prosper in Vulcan Alberta.

It was at this moment that I knew we had been transported into a strange new world. To seek out new life, and new civilizations… well the civilization of Vulcan at least! Vulcan is a tiny town of close to 2000 residents in the southern part of Alberta. It’s a 130 km drive south from Calgary.

As soon as we arrived, we saw a group of people excitedly snapping photos of themselves with the USS Enterprise replica, named the FX6-1995-A. The excitement overpowered me. I quickly parked the car and grabbed my camera. I got out as fast as I could before taking A LOT of pics! This moment encompassed two of my favourite things about travel:

2. Towns built around the passions of their inhabitants

If you’re a fan of Star Trek, you’ll surely know all about the Vulcan extraterrestrial humanoid species. If not, you will at least know about their most famous member, Spock. However, the town of Vulcan is not actually named after the Star Trek species. Instead takes its name from the Roman God of Fire – which I think is just as cool!

We decided to stop for a bite to eat to boost our energy before exploring more of Vulcan. Sadly, no Star Trek themed restaurant exists in Vulcan. I couldn’t locate a replicator, so we ate at a local fast-food restaurant across the street from the Vulcan Trek Station. The tourist information centre resembled a landed space station.

When entering the Trek Station, we were transported into the world of Star Trek. Staff members were wearing Star Trek crew shirts and greeted us with the Vulcan salute! My eyes scanned the room and I spotted an open door that leads the inside of a Starship. The main panels from the ship are signed by a bunch of the actors from the series The Next Generation.

If you are looking to fit in you can purchase your own Star Trek Costume here!

The rest of the room is filled with a large collection of Star Trek memorabilia. These memorabilia items include other autographed Star Trek set pieces and props. In the corner, I spot a traditional Klingon bladed weapon known as the bat’leth or “sword of honour.”

There was just so much to look at that my eyes couldn’t settle on one thing for too long before being pulled in by a new sight. I turn around to take everything in.

Noticing a captain’s chair that leads to another room filled with several Star Trek costumes and cardboard cutouts of Star Trek characters. I grab Christina on the arm and pull her into the costume room. I want to explore the room and see if my favourite characters are present in cardboard cutout form!!

As we hurry towards the costumes, one of the Vulcan Trek Station employees stops us and tells us that the costumes are there for people to try on!

We could wear actual Star Trek uniforms and pose with our favourite characters.

This gave us the opportunity to really immerse ourselves in the Star Trek universe. I decided to line up all my favourite Star Trek characters from different series, so they could all be together!

I am sure it was blasphemous to other visitors that Captain Kirk was hanging out with Data and Worf, but hey! Christina and I tried on several costumes, posing with each other and the cardboard cutouts and sitting in the captain’s chair- which is also autographed by several actors from Star Trek!

Afterward, we decided to purchase some merchandise from the gift shop for ourselves and friends. We both got a set of Vulcan ears, several sets of stickers and some Star Trek lapel badge pins. I also walked away with a pretty great coffee mug from Vulcan honoring the 50th anniversary of the original Star Trek series.

Related Post: Unusual Things to do in Alberta – A Giant Food Tour

Christina and I put on our Vulcan ears and decided to venture into town to see what other Star Trek sights we could find. As we crossed the street at the crosswalk we noticed a painted star trek badge on the ground!

Vulcan is officially the coolest place I’ve been to!

The town itself was pretty quiet during our walk and not many places were open. Many of the storefronts displayed fascinating Star Trek related window art! My favourite piece of art was an image of Captain Picard for a sewing store that said “Make it Sew” – taken from Captain Picard’s famous phrase “make it so.”

We continued walking down the road until we reached Bell Park on the corner of Centre Street and 2nd Avenue South. Here we spotted the bronze bust of Captain Spock and an impression of Leonard Nimoy’s hand. The hand impression was taken during Leonard Nimoy’s historic visit to Vulcan in 2010.

Of course, Christina and I checked how closely our hand sizes matched Leonard Nemoy’s! His hands were quite a bit larger than ours.

As we continued down the street towards a church we discovered a full wall mural of the Star Trek Medical Personnel. There were so many different spaces in town that had been touched by Star Trek.

The star of the show was Vulcan’s Star Trek museum called the Trekcetera Museum (permanently closed). We walked through the doors of the museum and were greeted by two incredibly friendly men.

Michael and Devan, the two owners of Trekcetera, excitedly took us on a tour. The tour displayed the officially licensed and authentic original costumes, props and set pieces used on various Star Trek series.

Trekcetera is more than a mecca for Star Trek items though. The museum contains props and costumes from various TV shows and movies such as Superman, Harry Potter, Titanic, and others. It is forever changing and expanding with new pieces of authentic memorabilia.

Michael allowed us to view the non-Star Trek area of the museum on our own and said he’d meet back with us when we got to the Star Trek display. I had no idea this museum contained all of these extra pieces, so I was thrilled to see an autographed script and golden snitch from Harry Potter!!

In the Star Trek section, we got to touch a real prop used by Brent Spiner who played Data. I think the best part of the museum was getting to see the costumes worn by the real actors on the show. You get to see how big or small these actors really are based on the size of their costumes. Most of the actors’ costumes were a lot smaller and thinner than I pictured them.

Overall, the owners of the museum really helped make our visit phenomenal. If you are a Star Trek fan, I highly recommend you take the trip to visit.

Vulcan holds an annual Star Trek Convention known as Vul-Con. The convention hosts a variety of Star Trek celebrity special guests, a costume parade and a gathering of the Red Shirt Union.

The convention always takes place in July and according to the town of Vulcan is the best time to visit. I hope to visit Vul-Con in the future and will be sure to tell you all about it!

Vul-con 2019 is occurring on July 26th & 27th and tickets can be purchased by visiting Vulcan Tourism here.

Live long and prosper, my friends!

Vulcan is located one hour south of Calgary on Highway 23 in between Calgary and Lethbridge. Please see the map below for driving directions from Calgary.