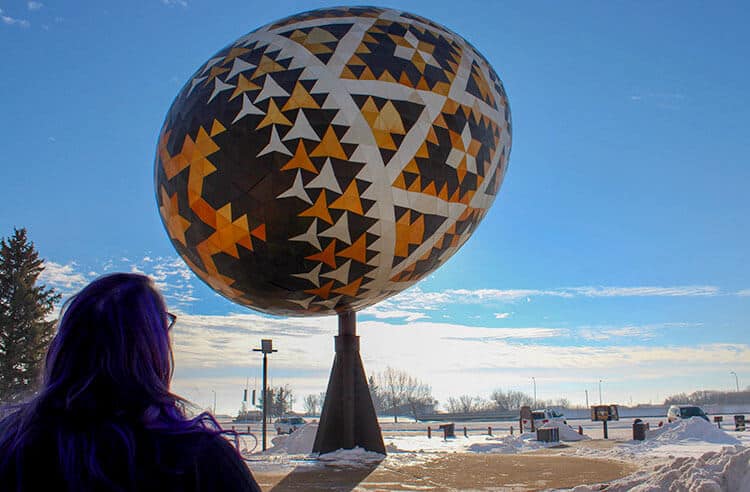 I often find myself wondering if I’m in Ukraine when living and travelling in Alberta. I’ve never been to Ukraine, so I have no idea what the country is actually like. But there’s a ton of Ukrainian immigrants in Alberta who brought with them all the best things from their home when they moved over. The result is some fascinating places to visit for people who like to see things a little out of the ordinary.

On a brisk winter’s day when we were looking for unusual things to do in Alberta, Christina and I decided to embark on a Ukrainian-Albertan adventure. We wanted to explore some of the giant roadside attractions the Ukrainian community created.

Christina and I headed for Mundare to see the giant sausage first. Why would anyone think this was a good idea for a giant roadside attraction? Who knows. But we went anyway, hoping for the best!

The town of Mundare is located 85km east of Edmonton (About a 1-hour drive). We pulled into town and kept our eyes peeled for the giant sausage. As we turned onto 50th street, it was right in front of us and our eyes were rewarded with a gross, red/brown veiny giant sausage!

Since it was winter, the ground surrounding the sausage was covered in a layer of snow which had become hard and crisp from all the freezing rain. This made it extremely difficult to walk through. But walk through it we did!

We took a photo of the 2 of us with the ever lovely (and extremely disgusting looking) sausage. I set my camera up at a distance far away enough to capture the entire sausage and set the timer to 10 seconds.

With the timer set, Christina and I ran to get into position. But with the icy snow acting as a booby trap, it was a challenge to make it to the sausage before the timer went off.

As we took off as fast as we could, I got my leg trapped in the snow and, in my typical style, fell face-first into a huge snow pile! My fall was both hilarious and happened at the exact same time the camera took the photo. So, all that appeared in the photo was a snowy sausage. It was such an amazingly fun time!

I’m vegetarian and find meat unappealing, so you might think I’d be a little biased. But I’d happily visit the 12.8m (42 feet) fibreglass sausage again! It’s definitely worth the trip if you’re looking for unusual things to do in Alberta.

After the sausage sighting, Christina and I headed towards Vegreville! Vegreville is 100km East of Edmonton, only 24km from Mundare, and famous for being home to the world’s biggest pysanka or Ukrainian Easter egg.

The pysanka was built in 1975 and weighs 5000 pounds! It definitely looks like it’s from the 1970s and has a very retro feel about it, with the brown-, yellow- and orange-coloured design. If you want to not only feel like you’ve shrunk but have also encountered a time machine, you definitely need to add this to your list of unusual things to do in Alberta!

A Full Day of Giant Food

If you’re looking for somewhere to take a full-day road trip and you live near Edmonton, pay a visit to the giant perogy in Glendon! It’s a 212km (one way) mini trip from the city, with several other giant roadside attractions to check out along the way.

Christina and I headed out early one morning to visit the oversized perogy — there’s just something hilariously awesome about giant food roadside attractions! Seeing them is almost as fun as dressing up as them. After all, I am the proud owner of a hot dog and a banana Halloween costume. Does a perogy costume exist?

Heading out from Edmonton, which has its fair share of giant roadside attractions such as a huge cowboy boot and a large metal baseball bat, we set off toward our first stop — Smoky Lake. This town is well-known for the Smoky Lake Great White North Pumpkin Fair held each October.

This event is exactly what you think it is — at least 1,000 people sitting in a giant room, watching as each pumpkin is brought out one by one to be weighed. The whole room is silent as each pumpkin is carefully lowered onto the scale.

Stifled gasps escape the mouths of the onlookers, as each pumpkin weighs just a little more than the last. I witnessed this incredible sight first-hand in 2017. The pumpkins came from all over Alberta and the biggest one weighed a whopping 1652 lbs!

As you pass through Smoky Lake, make sure you stop to see their giant pumpkins on display throughout the year. They’re made from orange-coloured concrete realistically shaped to look like the imperfect giant pumpkins weighed at the festival each year.

For an extra giant bonus as you work your way through unusual things to do in Alberta, stop in at the local gas station. They’ve got a giant bear inside the shop! It was an unexpected surprise when we visited and definitely worth a look.

The World’s Largest Mushrooms in Vilna

After leaving Smoky Lake, head to the tiny village of Vilna for a glimpse of the World’s Largest Mushrooms. Standing 15 feet tall, these metal mushrooms honour Alberta’s early Ukrainian settlers who would forage for the Tricholoma mushrooms to use in their cooking.

They’re right next to a park, just off Main Street. If you’re travelling with kids, it’s a great place to stop for a quick break before heading to your main attraction.

The perogy in Glendon has been on my list of giant roadside attractions I’ve wanted to see for years. As an Albertan, perogies have been a huge part of my food culture for my entire life. They’re a beloved food that originates from many countries across the world.

But like most things in Alberta, ours are inspired by Ukraine. The perogy in Glendon showcases a 27 feet tall, 6000 lb giant perogy sitting on a fork, ready to be eaten! Christina brought her kids with us this time, but they didn’t share in my extreme excitement of witnessing the greatest roadside attraction of all time.

If you’re looking for unusual things to do in Alberta, make sure you include some of the region’s giant food roadside attractions to add a layer of comedy to your journey!