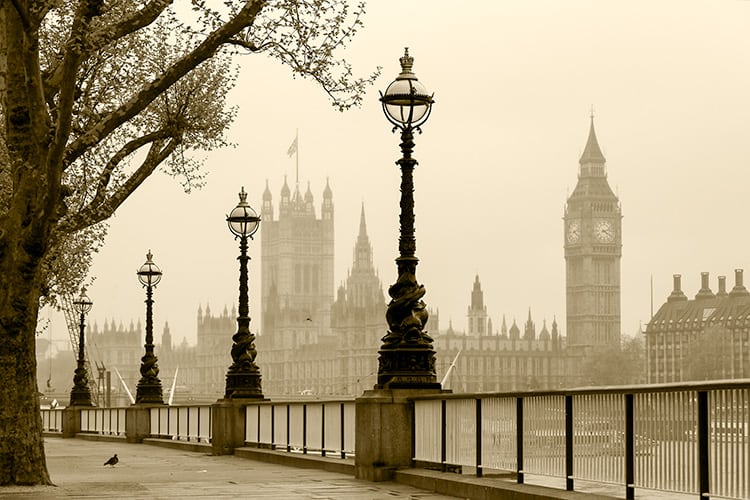 England is drenched in a dark and macabre past. With a history dating back to gruesome events such as the Black Death, cruel Witch Trials to grisly serial killer murders – there is no shortage of places to visit with a dark history in England.

In the English county of Derbyshire sits a village that was consumed by the Black Death in 1665. The tiny village of about 400 residence was struck by the bubonic plague after an infected bundle of cloth arrived from London.

The plague spread fast, killing villager after villager. To prevent the plague spreading to nearby communities the village decided to sacrifice itself for the greater good.

Eyam went into quarantine, which essentially meant everyone signed a sort of death pact. As people died, families had to bury their loved ones alone to prevent anyone else from contracting the bubonic plague.

Ultimately, after 14 months of quarantine 260 of the 400 villagers had died. Eyam is now known as the Plague Village and through the selfless acts of each villager – they prevented the spread of the plague to the nearby villages.

Eyam has a lot of dark history, but there are three specific sites you should not miss on your visit to Eyam related to the Great Plague.

Visit the Eyam Museum for more information about the villagers who lost their lives during the plague.

The second stop should be Mompesson’s Well. The well was the site where nearby villages would leave food and medicine for the villagers of Eyam so they could remain quarantined.

The last stop is a bit of a sombre location – the Riley Graves. This tiny cemetery is located near the Riley House Farm. The graves belong to one of Eyams residents, Elizabeth Hancock buried her entire family over the course of 8 days.

The witch trials in England were brutal. Entire families were executed in the Pendle Witch Trials in 1612. A young woman, Alizon Device cursed a man who later suffered a stroke.

She felt so guilty that she confessed to witchcraft and her mother and grandmother were also accused of witchcraft.

The Device family, as well as several other accused witches, were locked up in a tiny basement cell in Lancaster Castle. After being held, the accused were put on trial in the Crown Court at the castle and ultimately executed.

There are several areas around Pendle Hill and England that were hit by the witch trials. Take a dark travel tour of the Pendle Witches on your next trip to England.

The Charterhouse – Skeleton from the Black Death

During excavations at Charterhouse Square, archeologists discovered a plague pit that contained 25 skeletons hailing from the 14th century.

Upon examination, the bacteria which caused the plague were present in their teeth which means these were victims of the plague that hit London.

Visit the Charterhouse and take a guided tour to see the black plague Skeleton and learn about medieval London.

The Ruins of Whitby Abbey

If you love vampires, Whitby Abbey should be added to your spooky things to do in England. The beautiful gothic structure has been abandoned and left in ruins since the 9th century.

While Whitby Abbey’s history isn’t particularly dark – the ruins have been the inspiration for many books including Bram Stoker’s Dracula.

If ghosts are more your thing, you will want to add Pluckley in Kent to your list spooky sites to visit in England.

You won’t be able to turn a corner without running into one of the villages 16 resident ghosts.

The spirits have been sighted in various places around Pluckley, so be sure to pack your ghost-hunting gear and get ready to get scared!

If you aren’t familiar with Henry VIII and his numerous wives – let me tell you, the way he got rid of his wives was so unique that a rhyme was created so you could remember what happened to them all.

Anne Boleyn was Henry’s second wife and the first to be decapitated due to being found guilty of high treason. She was executed by beheading and buried in the Chapel Royal of St Peter ad Vincula at the Tower of London.

The Tower of London is also home to several ravens who live at the tower and ensure that it does not fall. The ravens were brought in by Charles II who believed the tower would fall if the ravens left.

The Tower of London is quite a popular London attraction so be sure to arrive early to beat the crowds.

The Ossuary at The Parish of St. Leonard’s – Hythe

Located deep within the basement of St. Leonard’s is a crypt which is the resting place of over 1200 skulls and 4000 bodies.

The ossuary is also referred to as “the bone-house” and has an impressive collection and is the best persevered in Britain.

Although not certain, the bones and skulls are believed to have been from plague victims who perished during the Black Death.

There is something a little bit creepy about thousands of bodies being kept in the basement of a church – but it’s not creepy when the church is surrounded by a graveyard. I don’t know why.

If you are more interested in war history, particularly WWII then you must stop by The Churchill War Rooms. Located in London below the streets of Westminster, the war bunkers look as they did in 1945 when the British Government during WWII.

The Churchill War Rooms is just one part of the Imperial War Museum which also features a map room, cabinet room, bedrooms and a telephone room.

The telephone room was disguised as a bathroom where Winston Churchill would converse with the President of the United States. How cool is that?

Jack the Ripper – The Whitechapel Murderer

There was no way that I would leave Jack the Ripper off of this list. The mysterious serial killer roamed the streets of London targeting women of the night.

The infamous serial killer allegedly had a decent understanding of the human body depicted by the way he killed and mutilated the bodies of his victims.

If you want to check out the Jack the Ripper Museum be sure to read the review by Dagney of Cultura Obscura and see other dark and unusual things to do in London on your trip.