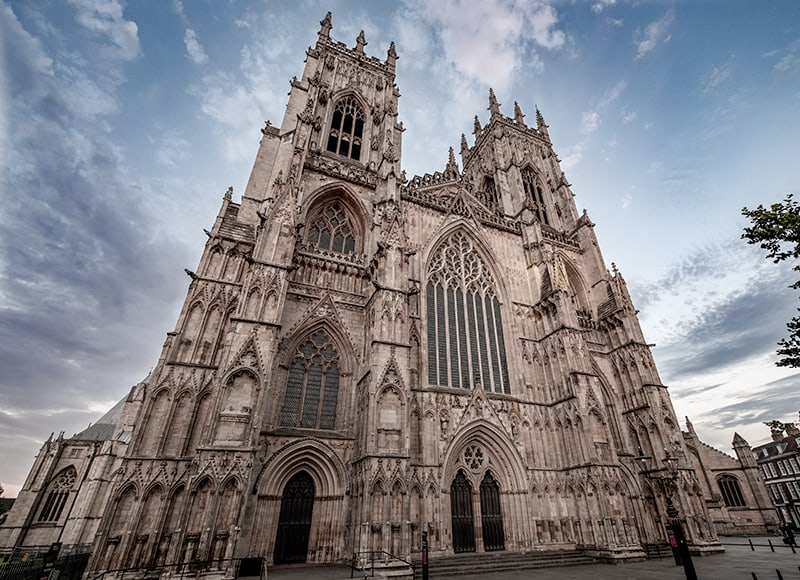 The medieval English city of York has a dark history. From suffering through the Black Death to being bombed in WWII, to the heads of enemies being displayed on spikes at the entrance to the city.

York has everything for fans of history, especially those looking for dark history sites and haunted places in York, England.

When I visited York, it was during the height of happy Christmas celebrations. The Christmas Market was bustling with cheery locals and visitors from afar.

People were rushing to The Shambles to go shopping in all of the Harry Potter stores. Others would hit up one of York’s smallest streets called Whip-Ma-Whop-Ma-Gate and try to pronounce the street’s name without laughing.

With so much cheer in the air, you wouldn’t suspect that York had darker secrets from its past. From Plague Houses to Witch Hangings to the ghosts that linger in the York Minster – here is a list of dark history sites and haunted places in York, England.

York is surrounded by medieval walls that you can walk along – which is cool enough as is! However, these walls have a more sinister history.

What makes these walls history dark and terrifying? The entrance into York from the south used to house the heads and bodies of criminals and traitors on spikes!

Similar to the horror of Vlad the Impaler in Romania, spikes were used to ward off his enemies. I can’t imagine people heading to York from London enjoyed the warm welcome of several impaled corpses.

The Black Death hit the country hard from the thousands that died in London to the Plague Village of Eyam – who’s townfolk sacrificed themselves to prevent the spread of the bubonic plague.

York, unfortunately, did not go untouched and was also infected with the plague.

On College Street, there is a house that is known as The Plague House. During the Black Death, the family who lived in the house were terrified of contracting the plague.

In an attempt to decrease contact with other people, the family sent their daughter out to pick up food at the market. In a tragic turn of events, during one of her journeys into town, she had caught the plague.

Rumour has it that the girls’ parents locked her inside her room, marked the front door with a red x and abandoned her – leaving her to die.

Seeing as she was suffering from the plague, the townsfolk refused to help her and she died alone in her room.

The Pressing of Margaret Clitherow – The Shambles

If you know the history of the Salem Witch Trials, you will have heard all about Giles Corey. He was pressed to death but it took him three days to die.

The horrible torture of being pressed to death also occurred in York to a woman named Margaret Clitherow. Her crime? Hiding Catholic Priests in her house as England was incredibly anti-Catholic.

Her punishment was to be taken to the toll booth on Ouse Bridge, laying on the ground, the door to her house was placed on top of her and large stones were piled on top.

Lucky for Margaret, she did not suffer the same fate as Giles Corey, instead of living for three days, she died within 15 minutes.

You can visit a piece of Margaret by heading to the chapel of the Bar Convent or visit her shrine on the Shambles.

Lund Court is one of the most haunted places in York. The lane often has an eerie feeling as though someone is walking beside you. If you take a ghost tour in York, your tour guide may be Mad Alice herself!

Who is Mad Alice? She was a York resident who was arrested and hanged in 1825. What was the reason for her execution? Insanity.

However, there are some stories that claim Alice tried to poison her husband. Whatever the reason she was executed, her apparition is often seen wandering aimlessly down the lane.

The medieval gothic cathedral stands tall in Deangate, its striking design stealing the focus from all of the surrounding buildings. It’s such a stunning cathedral that people pose and take photos of their friends but little do they know York Minster is one of the most haunted places in York.

One of the more famous ghost stories is a group of women who veered off of a tour of the cathedral in 1820 and were met by a man in a naval uniform.

What makes this story creepy is the man was the dead brother of one of the women! He apparently came back to tell his sister that there was an afterlife before disappearing.

Even without spooky stories, the York Minster is a must-see attraction in York. The gorgeous cathedral is on everyone’s bucket list for a reason.

Who doesn’t love a haunted pub? The Ye Olde Starre Inne has plenty of ghostly residents to scare anyone!

The building that is home to the pub was built in 1644, but the cellars are even older! The cellars were used as a hospital during the English Civil War and they are said to be haunted by soldiers who didn’t survive.

The Viking Invasion doesn’t have a particularly dark history, I mean besides the invasion part. The Viking history in York is just cool and the best part is the leader of the invasion in 866AD was named Ivar the Boneless. I need more details about this boneless man.

Be sure to check out the Jorvik Viking Centre if you want more information on Viking history in York.

The Jewish population of the world has not had an easy history. Their time in York is no different.

In the 12th century, anti-Jewish views started to rise and the Jewish community in York felt threatened after a Jewish family was targeted after a house fire.

Anyone who followed the Jewish faith sought refuge in Clifford’s Tower at the York Castle.

However, the castle was surrounded and the Jewish community decided it was best to die by their own hand rather than be captured, baptized into Christianity or killed by the mob.

Most of the families decided to die together in a mass suicide before setting the tower on fire. The few Jewish people who agreed to convert to Christianity were backstabbed by their captors.

Instead of allowing them to live as Christians – the mob massacred those who surrendered.

Witchcraft history occurred all over the UK – from witches in Scotland to the sad story of the Pendle Witches in England.

York was home to a woman named Mary Bateman who was hanged in 1809. Mary was known to poison people and steal from people so its no surprise was accused of witchcraft.

Around England, including York, many suspected witches were tortured by witch prickers before ultimately losing their lives by being executed by public hanging.

There is another famous Yorkshire witch named Mother Shipton. Similar to Nostrodomus or Scotland’s Brahn Seer – Shipton was able to see into the future. She predicted the great Fire of London and the end of the world.

The legendary story about a highwayman named Dick Turpin. Known as a violent criminal, he travelled around England created chaos and terror wherever he went.

Dick was eventually caught and brought to the prison in York Castle and hanged for his crimes. Rumour has it that his body was dug up by graverobbers for dissection by a medical surgeon.

You can visit his grave at 6 Lead Mill Ln in York. St George’s Churchyard, George Street

Everyone loves staying overnight in a haunted hotel, right? If that is your thing be sure to check out the pub and lodgings at the Golden Fleece Inn.

The pub embraces it’s dark history and ghost stories specifically about one individual named Alice Peckitt. Alice lived next to the inn and after her death patrons of the Golden Fleece Inn would see apparitions that looked like Alice.

To keep Alice company is that of a former WWII Canadian Soldier. The soldier stayed in York after WWII and fell from a window on the top floor and snapped his neck upon impact in the street.

People often see his ghost during their stay on the top floor.

Book your stay at The Golden Fleece Inn here.

Although Guy Fawkes crime and death occurred in London, he was from York. On the 5th of November, Guy Fawkes and his fellow plotters attempted to blow up parliament by planting barrels of gunpowder in the cellars under the building.

This was an attempt to start a Catholic uprising in England – he failed and now is forevermore remembered on Guy Fawkes night on the 5th of November.

How did they fail in their attempt to blow up parliament? Someone sent an anonymous letter warning the King of their plans.

There are several places throughout York associated with the life of Guy Fawkes. Be sure to check out the guide by the History of York – York in the time of Guy Fawkes.

Why not save these for later? Pin these to Pinterest!