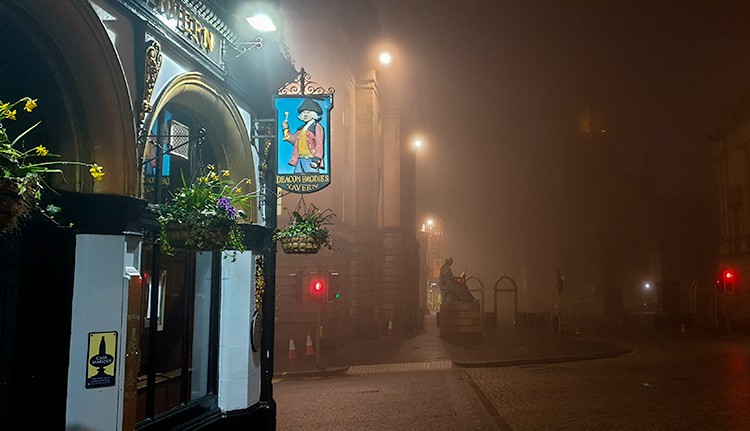 Edinburgh is known for being a city full of spooky things to do. With so many attractions filled with dark and haunted history, there is no shortage of pubs that have a similar macabre back story. Want to spend a night drinking with the ghosts? It is the perfect way to spend Halloween in Edinburgh as well! Here are the best haunted pubs in Edinburgh.

The White Hart Inn is one of Edinburgh’s oldest pubs. Located in Edinburgh’s historic Grassmarket, the pub has over 500 years of history. The pub’s cellar dates back to 1516 and the building was used as tenements over the years.

The White Hart Inn has a history of paranormal activity which includes the sounds of doors being slammed and the sounds of phantom footsteps. Many other patrons have felt the sensation of hair pulling or being tapped on their shoulders.

Customers and staff have witnessed the spirit as a dark shadow moving around the pub. Staff have also chased the shadowy figure but it always vanishes before it can be caught. Frightening!

The White Hart Inn also has a darker history. The serial killers known as Burke and Hare would get pub patrons drunk and offer to let them spend the night in their nearby lodging house. Instead, they would kill the inspecting victim through suffocation and sell their body to the nearby Anatomy School.

With all of the dark history and haunted history, The White Hart Inn is one of the best haunted pubs in Edinburgh to spend a night drinking with the ghosts.

If you have gone on a ghost tour down to the South Bridge Vaults with Mercat tours you may already have come into contact with the spirit known as “The Watcher”. The ghost has been spotted wearing 17th-century clothing and is often spotted watching you from the shadows.

The staff of Whistlebinkies have been locked in the cellar on more than one occasion – it seems like it’s the hot spot for activity in the haunted pub. Whistlebinkies has a rumour as being one of the best haunted pubs in Edinburgh, but not as much supernatural activity occurs nowadays.

If you don’t feel his presence it’s probably because he is busy keeping an eye on other parts of the South Bridge Vaults.

Book a tour with Mercat Tours and hear the spooky tale of The Watcher. You can also check out the best ghost tours in Edinburgh for more ideas.

the Banshee Labyrinth’s claim to fame is being Scotland’s most haunted pub. The coolest part of the pub? It is partially located in the Niddry Street vaults which allows you to drink deep within the haunted and spooky underground vaults in Edinburgh.

The Edinburgh underground vaults are dark chambers that were once used by criminals – including those who were said to commit murder in the shadows of the vaults.

The Banshee Labyrinth is one of the best haunted pubs in Edinburgh and is a must for any ghost hunter! One section of the pub belonged to Lord Nicol Edwards, who was known to be vile. Rumour has it that he would torture suspected witches in his basement dungeon.

The pub got its name as construction workers were said to hear the blood-curdling screams of a banshee as they renovated the pub. This banshee and Lord Nicol Edwards are said to take pub patrons’ drinks and smash them against the wall. So, hold on to your pint tightly!

The Mitre is haunted by a 17th-century Archbishop who hates electricity & music. That’s right! The haunted pub in Edinburgh is home to a rather dangerous spirit who dislikes electricity so much that he is thought to be the ghost behind electrocuting several electricians that have worked on the wiring throughout the years.

In addition to the electrocutions, the jukebox is often targeted by the angry spirit. If the music is not on par with the Bishops taste – the jukebox song is switched off.

Apparently, he haunts The Mitre pub because his lodgings were burned down in a fire – and he refuses to leave the site. I’d probably be angry if someone is playing “It’s Raining Men” into all hours of the night as well!

The Last Drop Tavern is my personal favourite pub as a dark history lover. The pub is located right next to the location of the gallows in Edinburgh’s Grassmarket. Now a trendy area full of lively pubs, the Grassmarket was once the place where many public hangings were carried out.

The pub is named after the last hanging that took place in the Grassmarket. The site where The Last Drop Tavern sits was once a large group of tenement buildings for the very poor.

The buildings not only offered a front-row seat to the hangings at the gallows – but the residents were said to live in impoverished conditions. As the pub was rebuilt using the original tone from the former tenements, the hauntings at The Last Drop are said to be of the former tenants that lived in the building rather than those who were hanged at the gallows.

The spirit that is spotted the most often is that of a little girl who will whisper the names of the staff working at the bar. Terrifying.

The Tolbooth Tavern oozes dark history. The pub is located in the building that used to house the Canongate Tolbooth, police headquarters and the prison. The tavern now sits alongside the People’s Story Museum which has a display showcasing what a cell in the former prison looked like.

The tavern’s dark history has ties to an exorcism of a suspected warlock. The poor man was exorcised by the justice clerk for Edinburgh, Sir Lewis Bellenden. The exorcism was said to be so terrifying that the warlock died of fright! Some could say that this is proof that it worked?

The pub is haunted by the spirits of the covenanters who perished in the prison during the mid 1600’s. Patrons of the Tolbooth Tavern claim that the back section of the pub is where the paranormal activity is said to occur. The Tolbooth Tavern has reports of knocking, banging and disembodied voices with the occasional drink being thrown off of the taverns bar.

One of the best haunted pubs in Edinburgh is Starbar. A human skull was found on the establishment and disaster and horror follow those who try to remove the skull from its spot.

All of the spooky going’s on at Starbar seem to be tied to the human skull. Anytime someone removes the skull from Starbar something horrible occurs – such as fires and floods!

Would you dare touch the skull or would you be too scared of the dreadful fate that will be coming your way?

William Deacon Brodie is known for his double life. A successful businessman by day and a gambling thief by night.

Deacon Brodie is truly the real Dr. Jekyll and Mr. Hyde. Deacon Brodie’s Tavern, which is located on the Lawn Market on the Royal Mile is known for being haunted.

After trying to flee the country once his criminal ways were discovered, Brodie was captured and hanged in the gallows located across the street from where the pub sits now.

Rumour has it that the apparition of Deacon Brodie has been seen wandering the streets right outside the pub and former gallows where his life ended.

If you are looking for more of a horror pub in Edinburgh, be sure to add Frankenstein’s to your list. This pub isn’t haunted but it is a really cool horror-themed bar!

The pub features monster shows, including a Frankenstein that looms above the bar – starring down with his monster eyes.

The pub has a gothic style and is donned with horror-themed decorations. Frankenstein’s offers really unique experience – it might not be haunted but it’s cool as hell and you should add it to your list.